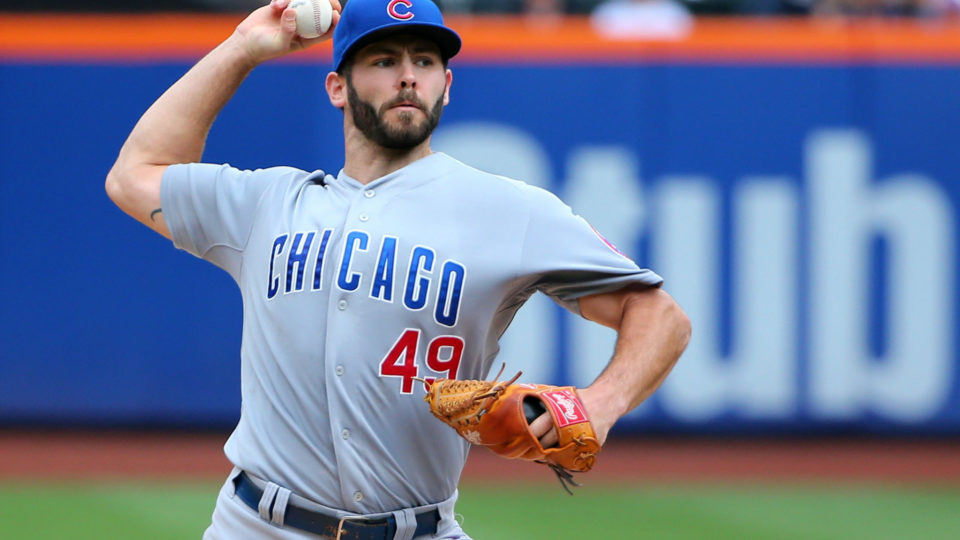 We are one week from the biggest tease of the year for baseball fans, as pitchers and catchers will report to Spring Training on February, 18th. This essentially means…nothing, except that Spring Training is that much closer.  Here are five players who need to have a big year for the Cubs to make a run at the playoffs.  They’re listed in no particular order. All stats are from Fangraphs.

The Cubs acquired Jake Arrieta via a trade with the Baltimore Orioles in 2013. The Cubs sent starter Scott Feldman to Baltimore for Arrieta and reliever Pedro Strop. I’m not quite sure how Theo Epstein hasn’t been charged with robbery yet.

Arrieta is a former top prospect who has always had electric stuff but struggled with his command throughout his career. Last year, Arrieta solved those control issues, walking just 2.36 batters per nine innings.

Arrieta missed a lot of bats too, striking out an impressive 9.59 batters per nine innings. This resulted in a 2.53 ERA, 2.26 FIP, and 4.9 WAR. Basically, Arrieta was better than everyone in baseball not named Clayton Kershaw, who is probably not human.

The Cubs know what they have in new signee Jon Lester. He has a proven track record. Arrieta has only had one dominant season and needs to prove that it wasn’t a fluke to give the Cubs a solid one-two punch at the top of the rotation.

This one is different considering Bryant likely won’t start the season in the majors. Based on his numbers so far, he’s likely ready for the next step, but the Cubs can gain an extra year of control of his contract by keeping him in Iowa for just nine games. (And who wouldn’t want to hang out in Iowa anyways?)

The Cubs have a hole at third base after trading bat flip extraordinaire Luis Valbuena to the Astros for Dexter Fowler. Bryant isn’t a sure thing at the next level though. He stuck out in 28.6 percent of his plate appearances in Triple-A last year, which could be a problem when he makes the jump to the majors like it was for fellow-phenom Javier Baez.

Bryant is a much more patient hitter than Baez though. For what it’s worth, Fangraphs’ Steamer projection has him slated for 21 homers, an .837 OPS, and 3.0 WAR in his rookie year. For comparison’s sake, All-Star shortstop Starlin Castro had 2.9 WAR last year in about as many games as Bryant is projected to play. The Cubs’ everyday lineup looks infinitely more imposing with Kris Bryant in the middle of the order, so he needs to perform close to realistic expectations.

The Cubs signed Soler in 2012, the same summer Yoenis Cespedes and Yasiel Puig signed their major league contracts. Soler took a little longer to reach the majors than those two, as he made his debut at the end of August last year, but he has the potential to be the best of the bunch.

As we saw last year, Soler has massive power and a cannon for an arm. I don’t think his second homer from his multi-homer game against the Cardinals has landed yet. But Soler is no one-trick pony though. He actually showed good plate discipline and contact ability in the minors, walking in 13.4-percent of his plate appearances at Triple-A Iowa last year and striking out in 20-percent. His walk rate dropped off a bit to six-percent upon reaching the majors, but that could have been due to a small sample size in just 24 games.

As with Bryant, the Cubs lineup looks much more imposing with Jorge Soler performing up to everyone’s expectations in the heart of the order. Fangraphs projects a 23 home run, 2.2 WAR season from Soler in 2015. A lineup of Rizzo, Castro, Bryant and Soler batting in succession looks awfully dangerous.

The Cubs signed Hammel prior to last season, and he exceeded everyone’s expectations the first half of the year, as he was a borderline all-star. The Cubs traded Hammel and Jeff Samardzija to Oakland for shortstop Addison Russell though, and Hammel’s production dropped off drastically with Oakland.

Now, he’s back with the Cubs on a two-year contract and reunited with pitching coach Chris Bosio with the hopes of reclaiming that magic he found last year.

There’s not any stats that need to tell this story. Hammel was great with the Cubs. He stunk with Oakland. He needs to be good with the Cubs again. The Cubs front office showed confidence in him by bringing him back, and the Cubs rotation can go from good to elite if Hammel justifies that confidence.

I struggled with this one because the Cubs probably don’t need Javier Baez to live up to his potential to make the playoffs. This is more of a wild card, as he might not even open the season in the majors.

Baez will provide solid defense up the middle, and he still has great power because of his ridiculous bat speed. If he can cut down on his strikeouts to what he was doing in Iowa (which is still not great), this Cubs offense could be a monster.

Fangraphs projects him to hit 27 home runs but with a .276 on base percentage. That is despite a projected .277 BABIP (batting average on balls in play), which would be well below his career minor league average. His projected strikeout rate is about 30 percent, which would be a huge improvement. If Baez does improve his K-rate by that much while getting a little luckier in the BABIP department than Fangraphs projects, this Cubs offense is going to be scary good for years to come.