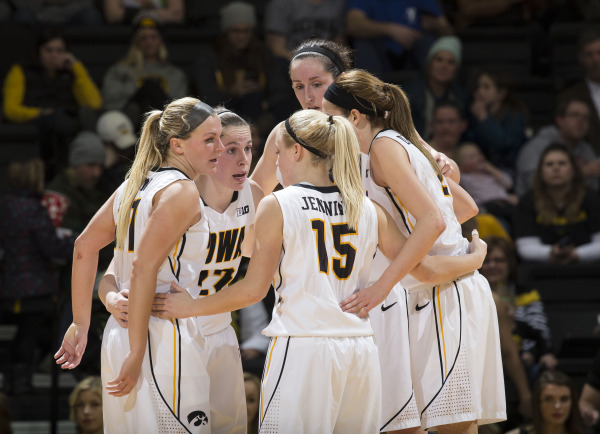 Coming off a 93-88 loss at #5 Maryland, the Hawkeyes looked to bounce back at home against Ohio State and that they did. With 4,572 in attendance most notably “The W guy” with his comical phrases throughout the game.  Four of the five starters tallied double figures in points, led by Ally Disterhoft with a game high  21, Bethany Doolittle 19, Melissa Dixon 13, and  Whitney Jennings with 12.

Bethany Doolittle had the first 4 points out of the gate for the Hawks. Disterhoft drained a three about 5 minutes into the game to put us ahead 11-8. They never gave the lead up. After a made layup by OSU, Sam Logic pushed the ball up the court, dribbled behind her back near mid-court crossing up her defender and making the layup, which accounted for two of her six points on the night.

After the Hawks went on a 19-2 run, Ohio State head coach drew a technical after barking at the official. At halftime Iowa was leading 41-29, Iowa was doing a good job of pushing it up court after made baskets and on OSU 14 turnovers.

The second half didn’t go as well as the first and I had just placed my bets in https://www.bettingnews.com/legal/nj/, as OSU had made some adjustments to getting back on defense which resulted in careless passes, dribbling turnovers, and some forced shots. The refs were lenient in the post-play which caused anger from both teams and the fans.

Ohio State made a second half surge leading heavily on their star players Kelsey Mitchell, the Big Ten’s leading scorer had 15 total and Alexa Hart who had 14. Ohio State was able to cut their once 20 point deficit down to 1 but were never able to get over the hump and take the lead.

Bethany Dolittle had a double-double with points(19) and rebounds(13), and Logic had 12 assists, 9 rebounds, 6 points and 7 turnovers. Dixon and Disterhoft had 6 rebounds apiece.  Ally Disterhoft scored the final 7 points to ice the game.   Final score: Iowa 73, OSU 65. Iowa Moves to 18-4 on the season and 9-2 in conference play.

Kali Peschel accounted for all of Iowa’s bench points(2).

Coach Bluder was asked about the turnover’s in the second half: “When you’ve been successful at it and been able to push(First half), it’s hard to pull back the reins a little bit… I never like turnovers, no matter when they are.

The Hawks play at Wisconsin on Sunday @ 2 P.M. on Big Ten Plus.