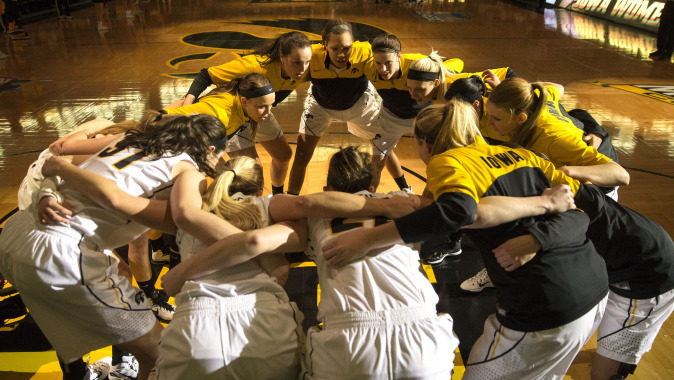 Iowa City, IOWA- The University of Iowa Women’s Basketball team won its opening game of The Hawkeye challenge on Friday 97-68 over a pesky Pepperdine Waves squad.

Ally Disterhoft got The Hawks off to another quick start, scoring the team’s first five points en route to her fourth career double-double: she finished with 14 points and 10 rebounds.

However, The Lady Hawkeyes were challenged by The Waves in the first half as they were unable to pull away.

Pepperdine was able to knock down some tough contested shots as well as connect on the open looks they did have in order to stay within striking distance through the first half.

Iowa switched between man and an aggressive match-up zone defense throughout the game which kept Pepperdine guessing on their offensive end.

This isn’t the first time we’ve seen the aggressive zone from Iowa this year: it’s proving to be a viable second option on defense. However, the zone did allow for some open looks for Pepperdine. When they were able to skip the ball across the floor, they were able to get open jump shots.

In addition, Iowa failed to box out a handful of times out of the match-up zone which also lead to a couple easy baskets off of offensive rebounds for Pepperdine. The zone still has some question marks, but seems to be a serious speed bump for opposing offenses.

With Pepperdine proving to be more trouble than most figured they would, senior guard Samantha Logic took control and led the way for The Lady Hawkeyes. Logic led the transition offense time after time: creating open looks for her teammates as well as getting to the rim herself, resulting in points or a trip to the foul line.

Logic finished with 12 points on five of nine shooting in addition to her six rebounds and nine assists. After the game she spoke about carrying over the second half momentum from Friday into their Saturday rematch of the 2013 Hawkeye Challenge championship game vs. Dayton.

“Yeah, I mean, we’re going to have to ride that momentum because Dayton’s a really good basketball team,” said Logic. “They play a lot like us: like to push the ball in transition, get quick shots, everyone can score on their team. I think we can take away from the first half knowing we didn’t play well and still had a lead going into half time and then capitalized on a lot of things in the second half.”

Ally Disterhoft also explained what helped the Lady Hawkeye’s put away Pepperdine in the second half of Friday’s game. “We let the offense come to us, stopped trying to force things, looked to hit our teammates, worked the ball a little bit more than in the first half,” said Disterhoft.  “We played Iowa basketball: looking to make the extra pass. That’s how we like to play and it’s a fun way to play. I think we did that in the second half.”

Iowa’s ability to go ten players deep in a given game contributes to their up tempo, run and gun style we’ve grown accustomed to. It showed in the second half of Friday’s game: Pepperdine was unable to continuously sprint up and down with The Lady Hawkeyes and eventually fell by the wayside.

Freshman Whitney Jennings also had a cool five assists and zero turnovers off the bench. Fellow freshmen Chase Coley and Carly Mohns also joined the fun and contributed valuable minutes, points, and fresh bodies, off the bench. Coach Lisa Bluder claimed all of the freshman improved greatyl on Friday night.

Not to be forgotten is Senior Melissa Dixon, who, after being recognized for scoring one thousand points as a Hawkeye before the game, poured in a team high 20 points on 7-12 shooting: 6-11 from three.

Dixon’s ability to knock down the outside shot has propelled her into fourth all time in Iowa Women’s basketball history in three point shots made, passing Wendy Ausdemore last night.

Few teams in the nation have the ability to go up and down with The Lady Hawkeyes over a forty minute game. So long as they continue to utilize their depth, athleticism, and size they will be extremely tough to beat.

Iowa looks to defend its 2013 Hawkeye Challenge Championship on Saturday 7:30 p.m. at Carver vs. The Dayton Lady Flyers: Admission is free for all.