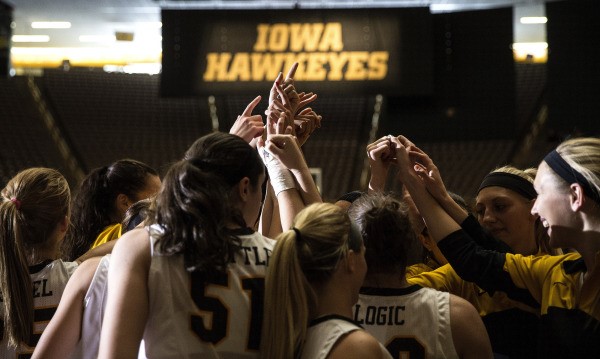 Iowa City, Iowa-The Iowa Women were back in action on Sunday against Robert Morris, who made the NCAA Tournament last year. The Hawks prevailed 85-67, led by Melissa Dixon with 21 and Kali Peschel with 19.

Peschel was the leading scorer in the first half with 15 going 5 for 6 from the floor. Dixon hit four three’s in the first twenty minutes, joining the 1,000 point club.

Iowa controlled the boards in the first half only allowing four offensive rebounds to Robert Morris.

Peschel and Logic had six rebounds apiece in the first twenty. They held Robert Morris to 34% shooting in the first half while shooting 43%. At the half Iowa lead 42-31.

Christina Buttenham used her length to drive to the hop in the second half scoring with some tough layups over defenders, she ended up with 10 points.

Sam Logic led the team in rebounds with 14 along with 11 assists and 7 points just missing a triple-double.

Ally Disterhoft struggled from the floor shooting 3 for 10 but still contributed 8 points.

Whitney Jennings provided persistent   defense on the perimeter and pushed the ball extremely well up the court.

Robert Morris was led by crafty Anna Niki Stamolamprou but Robert Morris never got within 3 possessions in the second half.

Coach Bluder was very pleased with Peschel performance because she worked very hard in the summer to get where she was at today. Bluder gave Robert Morris a lot of credit with the great defensive effort they played against us.

Be sure to join us at Carver this Friday and Saturday for the Hawkeye Challenge, both games tip off at 7:30 P.M.