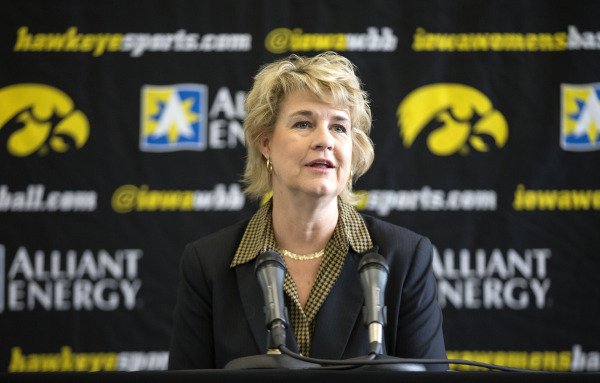 Coach Bluder’s squad has been picked to finish 3rd in their conference by the coaches’ preseason poll behind Final Four finalist Maryland and Michigan State.

One of the season goals for the Iowa women’s basketball team is to prove to the country that they are one of the best sixteen teams in the nation. To host one of the tournament games gives the fans an opportunity to come out to Carver and watch their performance in the NCAA tournament.

The Hawkeyes have four returning starters from last year, three of whom are seniors.

The first returner being senior Sam Logic, who has become one of the most talented players in the nation at guard.

Secondly, Bethany Doolittle a senior will occupy center, and be one of the premiere shot blockers in the conference.

Thirdly, Melissa Dixon also a senior, known as a three point specialist, will be back playing shooting guard.

Finally, Ally Disterhoft, the sophomore and Iowa City native, worked her way into the starting line-up half-way through the season at guard.

Sam Logic, a four year starter, looks to lead the Hawks to its 8th straight tournament appearance. She has already shattered the assist record, but will continue to add to that this season.

Bethany Doolittle is 109 blocked shots away from tying the Iowa record held by Morgan Johnson. It will be a tough task but is attainable. It will be a great senior season from the center of Iowa.

The accolades does not change their style of play because of one common goal, winning as a team at the end of the day.

Ally Disterhoft will be expected to fill bigger shoes this season. She will take that challenge with great pride while doing anything to help the team win. Whether that’s getting an old fashion three point play or shooting from beyond the arc.

Kathryn Reynolds is a great leader on and off the court and has graduated in three years and is starting her first year at Law school. Even though Reynolds stats are not significant as a guard, Bluder said, “When she talks, everybody listens.”

Nicole Smith a center did not play much last year with a right knee injury.  You should expect to see her healthy and more involved this year.

Claire Till the forward has not been able to practice much with her current knee problems she has been having. Coach Bluder mentioned, “Just being able to guard a five is a lot easier for Till than having to go out on the perimeter and having to close out on a driver.”

Alexa Kastanek played in 34 games last year as a freshman, and is expected to fill the same type of role as guard similar to last year.

Hailey Schneden a forward, who is a non-scholarship athlete played in 11 games last year.

Christina Buttenham was named to the 2014 Canadian Junior Women’s National Team. She missed summer workouts because of that but is catching up quickly and will play a wing position.

Whitney Jennings was named Indiana Miss Basketball. As a guard she is a very fast ball handler with an excellent jumper and three point shot. Coach Bluder said, “I don’t know how you keep Whitney Jennings off the floor, and that’s a great problem to have, isn’t it?”

Chase Coley was the Gatorade player of the year in Minnesota. She gives more depth at the Center position and reminds Coach Bluder of a Freshman Bethany Doolittle.

Bluder talked about how other Big Ten teams take the non-conference schedule lightly. Under her leadership Iowa has never taken that route. This gives the Hawks a leg up on competition, because of the stiffer competition from non-conference opponents allows the team to be ready for the Big Ten schedule.

She feels the biggest improvements need to be made on defense and rebounding, because when you are playing an up tempo game, the defense will get a lot of chances to be scored on.

Lisa Bluder also gave her staff, which has been together for a long time, a great deal of appreciation since they bring multiple abilities that mesh well with each other to bring out the best in the players on and off the court.