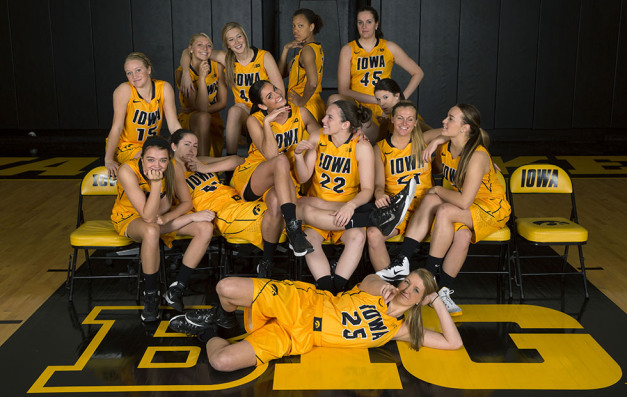 Five players scored in double figures for the Lady Hawkeye’s lead by sophomore, Ally Disterhoft who totaled 19 points on seven of eight shooting.

Disterhoft lead the first half charge with 16 of her 19 coming in the first twenty minutes. The Lady Hawkeye’s played stifling defense holding the Lady Spartans to 23.3% shooting from the field and just 22 first half points.

Iowa was able to extend their lead by securing defensive rebounds and pushing the tempo up and down the floor: earning easy transition baskets time after time.

Jennings, who played in her first ever regular season game for the Lady Hawkeye’s, wowed with her sound ball handling and array of passes. Jennings finished with just seven points (1-7 shooting) with five assists and four turnovers in her regular season debut, but her potential appears to be through the roof.

The Freshman was able to dribble out of any type of extended defensive pressure USC Upstate showed, and showed her ability to beat her defender off the dribble and get into the lane and create for her teammates. She also showed her impressive passing ability with a variety of sound post entries and kick outs to set up her teammates with good looks.

Perhaps Jennings played a little bit too sped-up in her first game, but her natural ability at point guard will allow her to impress for the next four years.

In addition to Doolittle’s rebounding prowess, she was able to run the floor on the break, with her teammates, and get good looks in the transition game as well.

It certainly appears as if The Senior’s back to the basket as well as mid range game has improved over the off season as she was able to score on face-up jump shots from ten feet as well as harass defenders on the low block earning easy looks: she finished with 15 points.

Reliable youth in Ally Disterhoft and Whitney Jennings coupled with the senior leadership of Bethany Doolittle and Samantha Logic will lead The Lady Hawkeye’s this season in which they should contend for the Big Ten Championship.

The Lady Hawk’s are on display again on Sunday, 2 p.m., at Carver against a Robert Morris University team that returns four starters from a team that made the tournament last year.