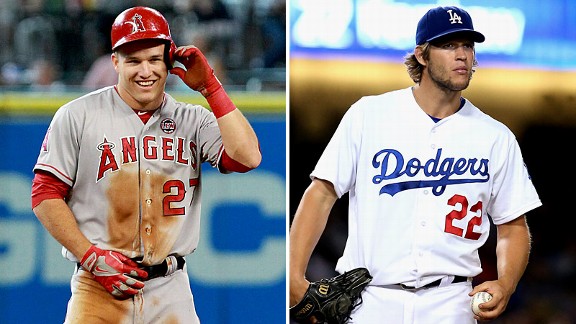 Los Angeles, California is the home to both MVP award winners of the 2014 Major League Baseball season. Dodgers Clayton Kershaw was the first to win the award as a starting pitcher since Bob Gibson won the award in 1968. The Angels’ centerfielder Mike Trout won the award in unanimous fashion. Both Kershaw and Trout are without a doubt among the best players in baseball. That is not a question. But did they win this year’s awards by default?

Clayton Kershaw had perhaps his most exciting year as a starting pitcher.  Kershaw has enjoyed great success in his first 7 seasons. After posting an era of 1.83 just a year ago, many wondered if he could repeat such a dominant season. Despite the doubts, Kershaw posted an era of 1.77, a career best. He was the clear choice for the Cy Young award. Kershaw appeared in non-human form this year as he allowed only 9 home runs while striking out 239 batters and giving up only 31 walks, also a career best. He flirted with perfection against the Rockies while successfully pitching his first career no hitter. An error by the Dodgers’ shortstop, Hanley Ramirez, was the only stat that interfered with the perfect game. Kershaw was clearly the best pitcher in the game in 2014, but would he have been awarded the MVP if slugger Giancarlo Stanton had stayed healthy?

Stanton had an outstanding year. He finished with a league leading 37 home runs. He drew 94 walks and knocked in 105 runners. Stanton was injured late in the season after he was struck in the face by a ball. How did this impact MVP voting?

Many critics have an issue with the MVP award going to a pitcher who pitches every fifth day. Personally, I don’t have an issue with a pitcher winning the MVP. Kershaw himself missed over a month in the beginning of the season due to injury. Voters still awarded Kershaw with the award despite missing time. It may have been a different story, had Stanton stayed healthy.

The American League MVP race was different. Mike Trout received all 30 votes for the MVP award. I couldn’t help but question this. Would Trout have won if he were compared with hitters from the past few years? Was Victor Martinez robbed? Are we over valuing home runs?

The game is clearly changing. Pitching has been substantially better and home runs have come in a rare form. A hitter with 30 home runs is often considered elite.

Trout had strong numbers. There’s no question, but he also lacked in a few key areas. Trout finished with a .287 batting average. This is the first time that the AL MVP finished with a batting average under .290 since 1969 when Harmon Killebrew took the award. Trout finished with 36 home runs. A strong number but not mind blowing. He drove in 111 runs and scored 115 times. Trout led the league in one category that you don’t want to be on top of, strikeouts. Trout struck out 184 times in 602 at bats. He also only managed to steal 16 bases, which was a career low.

It’s shocking to me that a player can lead the league in strikeouts, yet still be considered the best. There is a case to be made for both Victor Martinez and Jose Altuve.

Jose Altuve finished as the American League batting champion. Altuve finished with a .341 batting average and a .377 on base percentage. Most ignored Altuve due to the lack of power. What people have to understand is that they’re completely different players. Altuve is the kind of player that will put up stingy at bats and find ways to get on base. He did exactly that. He also led the league in stolen bases with 56. Altuve consistently found ways to get on base and move himself into scoring position. The key to Altuve’s argument is that he only struck out 53 times in 707 at bats. Altuve has and never will be a power hitter. He’s a lead off hitter that does his job better than just about anyone. Altuve also had no protection behind him. Trout had players like Albert Pujols and Josh Hamilton hitting behind him.

One argument that I’ve heard multiple times is that Altuve played for a team that was nowhere near playoffs, whereas Trout’s team finished with the most wins in the regular season. First off, does this really matter? Why should the team be taken into account for an individual award? Of course the Angels were going to win more games than the Astros. The Angels have deeper pockets. The Angels payroll exceeded 154 million dollars as opposed to the Astros just reaching 50 million. Secondly, what’s the goal here? Wins or Rings? As far as I’m concerned, both teams fell short of the World Series this year. Sure the Angels got to playoffs but they got swept in the first round. How are they really any different from the Astros? If you look at the big picture, both teams came up empty handed. The Angels got to play one more series where they were swept.

But lets just go with the argument that Altuve lacked power and a winning team. I present to you… Victor Martinez. Martinez finished with a .335 batting average, a league leading .409 on base percentage, struck out only 42 times in 561 at bats, 103 RBI’s, 32 home runs, and was on a playoff team. He beat Trout in batting average, on base percentage, slugging percentage, OPS and had 142 less strikeouts. Martinez had only 4 less home runs and 8 less RBI’s. How can you not give him the award? The answer is that he was primarily a designated hitter. Martinez only played 33 games in the field. This was the primary argument against him.

I understand the argument but I find it rather invalid. How can you penalize a guy for playing in YOUR league? The American League allows for a designated hitter. If you are going to penalize a guy for playing by your rule then perhaps the rule should be changed. If this isn’t a good enough argument, then lets bring Kershaw back into the conversation. Kershaw only goes out once every 5 days. In total he made an appearance in 27 games or 198.1 innings. Martinez might not have played the field but he still played in 151 games or 641 innings. Do you see my point here? Martinez still played almost every game.

It would be interesting to see the outcome if we analyzed the statistics without the player’s names.

It just seems that we are valuing power to an extreme. Trout had a great year. That has never been questioned. It just seems that he might have gotten this award by default due to the strong opinion against the designated hitter and the lack of power in the league. The game is changing.

As a baseball fan, we must remember that we are getting to see the game change in an exciting way. Players are beginning careers at a younger age and bring new excitement to the game. Mike Trout and Clayton Kershaw are two premier players that will most likely be talked about for the next 15 years when discussing MVP awards. These are two of the best. They are the MVP’s of 2014.

These were simply interesting topics to think about over the course of what seems to be an endless offseason. I’ll leave you with this one. With Derek Jeter gone, have we found the new face of baseball?