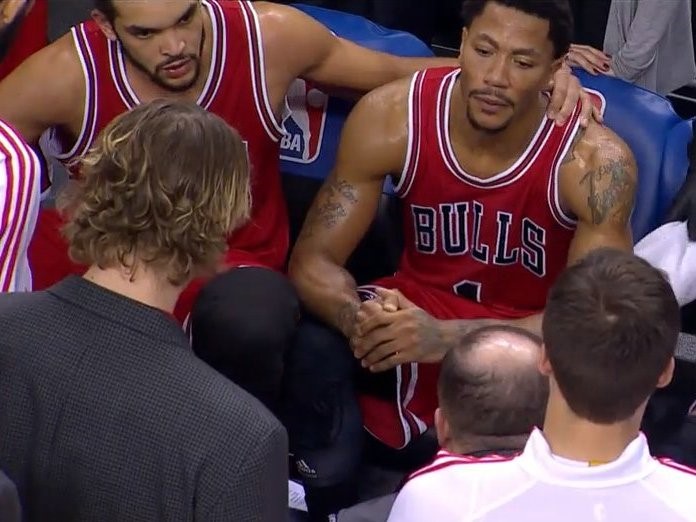 Derrick Rose is the Point Guard of the Chicago Bulls even though he hasn’t played much  since winning Most Valuable Player in the 2010- 2011 season over Dwight Howard in his final year with the Orlando Magic.

Since Rose has never played  a full season since tearing his ACL in his left knee in their first playoff game of 2012 after the NBA Lockout shortened everyone’s schedule.

He missed the entire 2012-13 season recovering from his injury but was largely criticized for not coming back during the playoffs even if he was not mentally ready. Some even called him selfish.

Last season he  returned but again got injured  only playing 10 games into the season, tearing his meniscus in his right knee. This was just another blow to Bulls fan because of the talent and explosiveness  he brings.

This season he has sprained both ankles and most recently injured his hamstring although that’s considered a small injury to Rose. He made more comments about his future:  “I think a lot of people don’t understand that when I sit out it’s not because of this year. I’m thinking about long term. I’m thinking about after I’m done with basketball.”

People say you should keep your personal life away from your sports career but they both affect each other and when the media asks you a question like that you have to answer it even if it affects what others will think of you.

TNT NBA tip-off on Thursday’s featuring Charles Barkley and Shaquille O’Neal ripped into him like a Thanksgiving turkey. Barkley calls Rose’s comments “stupid” because that’s part of the game and there are people who work just as hard as him and go home to a shack not a big house.

I don’t agree with Barkley’s comments about Rose being “stupid” because everyone allowed their own opinion and I think its better to speak aloud than bottle it up.

Shaq said “if you can walk, you can play, you see how Charles and I walk but it was worth it to provide for our family. Those comments make him look soft as a former MVP.

I like Shaq’s comments better because he defends people that limp after basketball. His soft comment is based off of being selfish and connected to his lack of return last year for the Bull’s playoff games.

Nazr Mohammed a veteran  reserve player for the Bulls compares how ridiculous the media is. He donates one million to charity but that’s only one day of news, whereas he comments about the future gets micro-scoped for weeks, sometimes even months.

Joakim Noah said “Everyone needs to chill out.” This is the best comment coming from a teammate who understands what Rose is going through as a player and helps stop the criticism.

Personally, I liked that he was being honest and straightforward about his playing future. Having Derrick Rose most of the time is better than risking him encountering  another season or possibly a career ending injury because he played to often without a break to rest himself.

Some players are injury prone and some never get injured. Brandon Roy is a player who retired at the age of 26 but attempted a comeback only to re-injure his knee and retire for good.  I would say he’s injury prone but the real question is why is he getting injured all the time? He plays hard every time he’s on the court regardless of a potential injury looming.  His body wears and tears like everyone’s. We just don’t hear about it much unless it’s someone in our community of or a well known player.

The bottom line is a person just like everyone else and has a family that needs him after his NBA career. I’ve seen many comments about how selfish he is caring for his future, but really they are the selfish ones that think  an athlete  winning or stats are more important than his life outside of basketball.