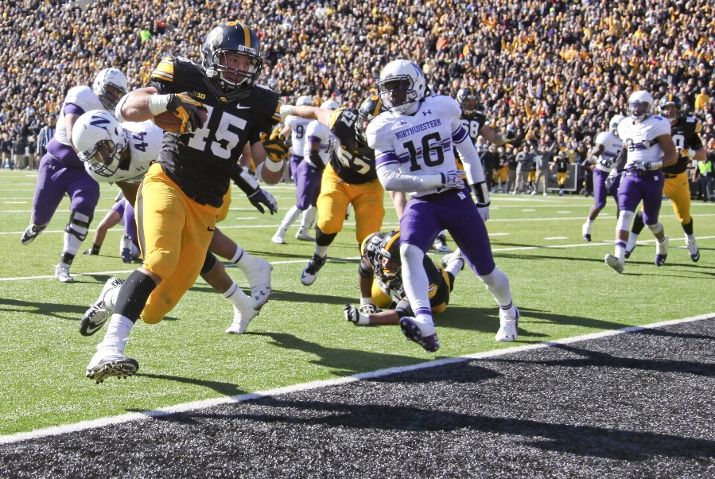 ​IOWA CITY, Iowa – Simply put, this was Iowa’s most complete game of the season.  The offense looked good, the defense looked dominant, and even the special teams had their moments.

This is not to say that the Hawkeyes played a perfect game. There were numerous bobbles and scares during the game, and it was not a shutout either. It was a very good performance though. The most important attribute of the Hawkeyes victory today was their ability to make big plays, i.e., their explosiveness.

The Hawks set the precedent for explosive plays during the opening kickoff. Jonathan Parker returned the kick for 54 yards, breaking into Wildcat territory. That return was coupled with a personal foul on the Wildcats to put the Hawkeyes on Northwestern’s 31 yard line for their first play from scrimmage. Iowa established early momentum by scoring just 1:45 into the game on an 8 yard carry from Mark Wesiman.

Iowa’s big plays of the day were enabled by their balanced running and passing attack.  All throughout the game the Hawks made big running plays by successfully executing important blocking assignments. Fullback John Kenny, left tackle Brandon Scherff, and the rest of the offensive line all had solid games allowing Mark Weisman and fellow running back Akrum Wadley to make big plays.

Weisman scored on the third drive of the game with yet another big 14 yard run, and Wadley looked maybe even more explosive with 26 and 23 yard runs being his two longest of the day. For the first time this season, Iowa had a 100 yard+ rusher, with Wadley going off for 106 yards.

What is most important about Iowa’s successful running game for the day was its ability to open up the Hawk’s play action pass attack. Jake Rudock threw for 239 yards on the day with quite a few long ones mixed in there. In the first quarter Rudock hit Matt Vandeberg for a 42 yard pass, and then on the following drive hit Kevonte Martin-Manley for another big 43 yard strike. The second quarter was just as explosive in the passing game which included a 31 yard touchdown pass from Rudock to Trevaun Smith.

The defense was not without big plays either. Defensive tackle Louis Tinca-Pasat had a career high of three sacks during the game to lead the Hawkeyes who finished the game with a team total of 5 sacks. Safety John Lowdermilk also came up big for the Hawks when he forced a fumble which was recovered by Iowa in the second quarter. All this while holding Northwestern to just 180 yards.

Even the special teams had a couple big plays. First off was the big opening kickoff return by Parker.  Marshall Koehn nailed a 48 yard field goal in the second drive of the game. Ben Niemann blocked a punt, recovered the ball, and scored to make it a complete team effort when it came to making big plays.

All in all, the Hawkeyes showed an explosiveness today that has been fleeting for the majority of the season. Hopefully they can carry the momentum, as they did all throughout the game today, into the Minnesota game next week.