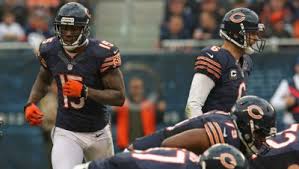 Going into the 2014 season, the Chicago Bears were expected to have one of the NFL’s most explosive offenses.  Led by quarterback Jay Cutler, the Bears offense consists of stars such as Brandon Marshall, Alshon Jeffery, and Matt Forte.  Five games into the season, the offense of the Bears looks far from spectacular.

After losing in week 5 to the Carolina Panthers 31-24, the Bears hold a 2-3 record.  It has been a disappointing first five games, and the offense deserves a lot of the blame.

Despite the fact that he has not recorded a rushing touchdown this season, running back Matt Forte has been the go to guy for the Bears offense the past couple weeks.  After rushing for 122 yards in week 4 against the Packers, Forte ran for 61 yards, to go along with 105 receiving yards, against Carolina.  Forte also coughed up a fumble in the game.

Bothered by an ankle injury, wide receiver Brandon Marshall has not been able to use the explosiveness he has shown in past seasons with the Bears.  Since week 3, Marshall has had six receptions for 69 yards and one touchdown.  Alshon Jeffery caught 6 passes for 97 yards and a touchdown at Carolina.

Perhaps the most troubling aspect of the Bears offense has been their play in the second-half of games.  In both week 4 and week 5, the Bears failed to score a touchdown in the second half.

Turnovers were once again the story surrounding Jay Cutler in Carolina.  Cutler threw two interceptions to go along with a fumble.  The most crucial interception came when the Bears were up 24-21 with just under six minutes left.  Cutler overthrew Santonio Holmes and into the diving hands of Carolina safety Thomas Decoud.

There is still a lot of time left in the season, and with no team in the NFC North more than one game ahead of another, the Bears have plenty of time to climb the standings.

If the offense can begin to perform at the level that the league knows it is capable of, the Chicago Bears will have no problem turning the tough start to the season around.