By Joe Rajchel and Mark Freie 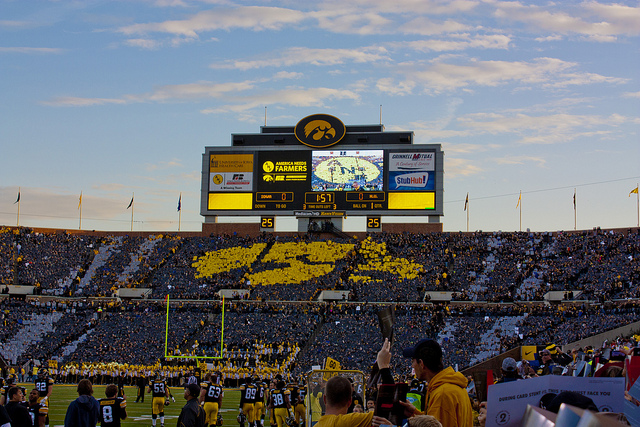 IOWA CITY, Iowa – Following an 8-5 season that concluded with a 21-14 loss to LSU in the Outback Bowl, expectations have been sky-high as a favorable schedule presents the opportunity to increase that win total. While the team is not going to take anything for granted heading into the season, there is sense that both coaches and players are excited to show the team’s full potential.

Head Coach Kirk Ferentz, heading into his 16th year as the leader of Iowa’s program, has dealt with his fair share of preseason expectations and knows it is important to just take the season a day at a time.

“Based on experience either the sky is falling or we are going to the top, but the truth is usually somewhere in the middle,” said Ferentz. “It’s going to be fun to actually see what’s going on and what we can do. Bottom line is, how we play this year is going to be determined by what we do on the field, how we react to different situations.”

After going into last season with doubts at the quarterback position, Ferentz is confident in Jake Rudock and has tabbed him as the starting QB going forward. However, he likes what he is seeing from both Rudock and backup C.J. Beathard.

“We have two guys that are experienced and we have confidence,” said Ferentz. “Last year neither guy was experienced. We had hopeful confidence in both guys, but it’s a lot better after you watch a guy actually perform in competition. So we’re happy about seeing what we saw last year.”

Iowa got a nice offseason surprise when offensive lineman Brandon Scherff decided to stay at Iowa instead of declaring for the NFL Draft. He is now widely considered the near consensus best offensive lineman in the country and has the chance to really leave his mark as a Hawkeye.

“Last year he really was gaining ground, and I thought he was one of the better players you could find in college football a year ago. And we expect him to be a better player this year,” said Ferentz. ” He’s already awfully good, but I think he’s got a chance to be one of the best players to ever play here.”

One of the questions that has to be addressed is how to replace the loss of linebackers Anthony Hitchens, James Morris, and Christian Kirksey, all of whom combined to make up the most formidable linebacking corps in the Big Ten. Ferentz will be looking for Quinton Alston to take the lead in the middle of the defense.

“[He is] accepting of the leadership role. He pushes hard out there, so we’ve seen a lot of good things from [him] in practice,” Ferentz said. “Quinton hasn’t played a lot in first and second downs, so that’s going to be an adjustment for him. But every player goes through it, and I think he’ll handle it well. Plus he’s an older, mature guy”

One of the biggest concerns that Ferentz needs to address is that of placekicking. Mike Meyer gave three solid seasons to the Hawkeyes, but now Iowa has to find someone solid to anchor the special teams.

“Placekicking is a big question mark now. We just don’t know. It could well be Marshall Koehn. It wouldn’t surprise me in the least,” said Ferentz. “But we need to develop consistency at that position, the competition there should be healthy.”

Ferentz believes the next three weeks will be crucial for how the season starts and develops. According to Ferentz, this is when the team can figure out what is going to work and come together as a tea,.

“Now the big thing is this is a very, very pivotal three weeks for our football team and for every football team in America. Camp is one time where you have your players for the most part,” said Ferentz.”You have their sole attention outside of this week, all their thoughts, all their energy should be devoted towards the team getting better.”

It is a short three weeks before Iowa opens up the season against Northern Iowa. While most of the national media has high expectations for Iowa, Ferentz knows there is work to be done to meet those lofty goals.