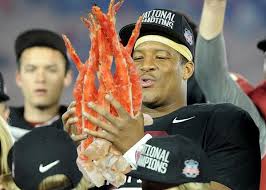 Let’s cut to the chase. On Tuesday April 29th, 2-sport athlete, Jameis Winston of Florida State University, was caught stealing $32 worth of crab legs and crawfish from a Florida supermarket. For the charges to be dropped, he has to comply to the civil suite he was issued and complete at least 20 hours of community service. I’M PERFECTLY OKAY WITH HIM STEALING THE CRAB (AND CRAWFISH). Here’s why:

1. He stole the food. He wasn’t GIVEN the food by an “anonymous booster.”

The crazy thing is, I bet this would have been blown out of proportion even more if some FSU alumni had given Winston the food as opposed to him stealing it. The media will twist anything they can for a story. This one was simple and (seemingly) one-dimensional. Jameis stole the food on his own, and he’s getting charged for it-that’s it. Also, the NCAA just had a rule change allowing “unlimited meals and snacks to collegiate athletes.” So it doesn’t necessarily make sense that Winston would steal food, but he saw the crab and he wanted it-so he took it.

Have you ever had seafood in a state that’s connected to an ocean? Because it’s usally 17 times better when you do. And if you check out the website for the supermarket he stole the food from, it looks to be like a pretty respectable place. Heck, the crab legs and crawfish he stole were probably caught that morning. The temptation was real!

3. Stealing crabs is better than having crabs.

Laugh all you want. But the headline: “Jameis Winston Caught Stealing Crabs” is a lot better than “Jameis Winston has crabs.” And hey, he was stealing food-$32 worth of FOOD. This wasn’t a bank robbery. He didn’t go on a joyride in some exotic vehicle. The kid stole crab legs and crawfish.