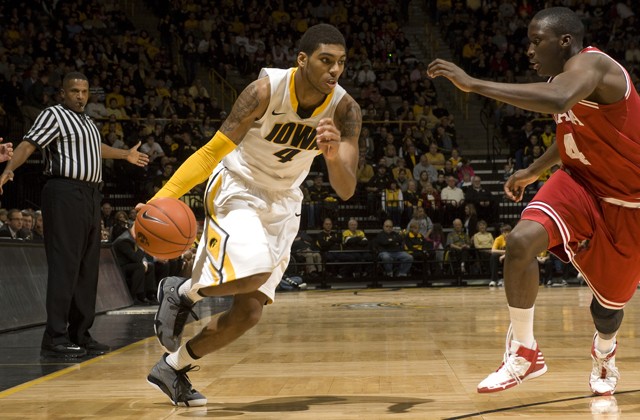 Talk about a wild ride on a Sunday afternoon.

The crowd at Carver Hawkeye Arena was treated to a great basketball game and they even got the ending they desired.  Iowa pulled away from a very talented Minnesota team to secure a 21 point victory.  The final score was Iowa 94, Minnesota 73.

It was back and forth for the first 18 minutes of the game as no team was absolutely taking control.  That all changed at about the 2:22 mark of the first half.  Iowa started to get sloppy and Minnesota was taking advantage.  They went on a 9-0 run over the span of about a minute.  It appeared Minnesota was pulling away.

Iowa would match Minnesota as they would go on an 8-0 run to end the half to swing momentum back in their direction.  A couple of three pointers by Josh Oglesby and a Mike Gesell layup cut the Gopher lead to just two at the intermission.

Iowa’s Roy Devyn Marble fired the opening salvo in the second half as the Hawkeyes took the lead back.  There would be more jockeying for position as they game progressed, but Iowa started to show signs that they would be taking control of this game.

Small 5-0 and 6-0 runs would help Iowa build a 10 points lead at the 12:35 mark in the second half.  Minnesota would get it down to 6 with about 7:25 left, but the Hawkeyes didn’t let them get any closer as they shut the door.  Minnesota didn’t have a basket from about the 5 minute mark to the 1 minute mark and during that time Iowa went on a 15-0 run sparked by Aaron White to build the lead to 22 and officially crush the Gophers spirits as they tried to make a comeback.

Marble and White, who combined for just 1 point in the first half of play, ended up scoring 33 of Iowa’s 53 second half points.  Marble would hit a couple of three’s to get himself going, White had an ‘and 1’ or two to get himself into the game.  Josh Oglesby was also huge as he was 5-7 from behind the arc for the game.  It’s nice to see him get his shot back.

Nine three pointers, a +7 rebounding margin and 43 bench points are what drove Iowa to this victory.  Coming into the season everyone was worried how this team would shoot from behind the arc, well I think they’ve answered that question.  If Iowa continues to shoot like this from behind the arc, they will have loads of success in the Big Ten.

Iowa will now travel to Ann Arbor to take on the Michigan Wolverines who happen to be undefeated in conference play.  Iowa struggled there last year so it’d be nice to leave there with a 5-1 conference record.  That game is on Wednesday and will tip off at 6:00 p.m. CT.