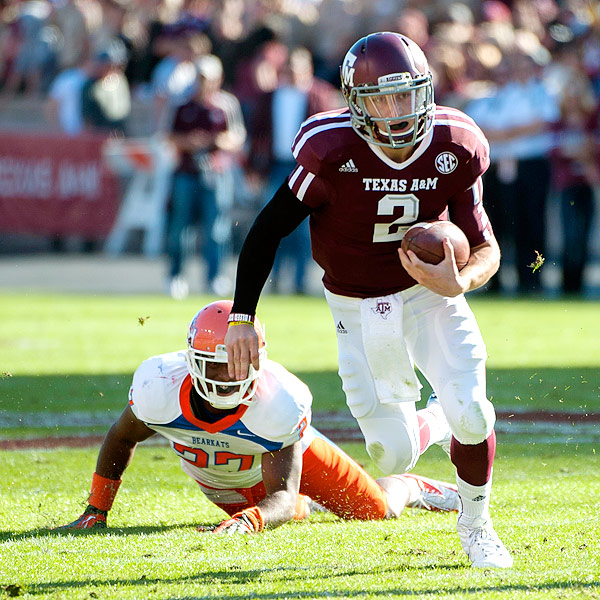 The newest name on the already extensive list of players accused of getting paid for play in NCAA sports has added more fuel to an all out wildfire. That name is Johnny Manziel. As the debate regarding whether student athletes should be paid heats up while playing collegiate sports analysts, fans, and athletes have all chimed in addressing their opinions regarding payment of NCAA athletes.

The 2013 year of college football began with an investigation stemming from allegations that Texas A&M Quarterback and 2012 Heisman Trophy winner Johnny Manziel accepted payments for autographs he had signed in January 2013. These accusations are nothing new to those individuals who have won the coveted Heisman Trophy. Reggie Bush and Cam Newton, both former Heisman winners, have also found their names to be tarnished by accusations of being paid while playing college football.

As the debate gains national attention, the logistics of paying student athletes seem to make sense, but I feel that this issue contains much more than seeing Johnny Manziel make some extra spending money.

How can Division 1 schools pay for this?

According to an article released on July 1, 2013 by USA Today, a study found that just 23 of 228 athletic departments at division 1 NCAA schools generated enough money to cover their expenses in 2012. If only 10% of Division 1 schools are able to break even how do players expect schools to pay athletes, who already may be on a full ride scholarship? With regards to football, readers of this article may very well know that FBS schools are allowed 85 scholarships to disburse to football players on a full ride basis, there are no partial scholarships for FBS schools. Are these full ride scholarships not enough?

What is included with these scholarships you might ask?

According to an article posted on Forbes.com by Jeffrey Dorfman, a scholarship to a university could be estimated at about $125,000 depending on if the university is public, or private. These scholarships cover tuition, room and board, meal plans, and money for miscellaneous expenses. On top of that money includes the world class development of those scholarship athletes training to be the best football player they can be. College football players are also exposed to world class athletic trainers, physicians, strength and fitness coaching, and the nation’s top coaches.  With that being said, if these athletes were to be paid, would colleges turn the expenses of the full ride scholarship around on the athlete and make the athlete pay for those services? I feel that if student athletes were to begin getting paid that colleges could possibly begin sticking the bill of the previous benefits mentioned on the athlete, causing demand for higher payments.

What sports in the NCAA are worth paying players for and which ones are not?

In the NCAA football, men’s basketball, and women’s basketball are referred to as the revenue sports. These sports account for the majority of the money an athletic department is able to accumulate over the year. How would the NCAA be able to determine which athletes in which sport should be paid and how much they should be paid? Since this article is mere speculation, I will go as far to say that the aftermath of the NCAA giving the O.K. to pay only football players, men’s basketball players, and women’s basketball players would leave some wrestlers, women’s soccer players, and countless players in other sports feeling that they are not as important as those other athletes. Would a decision like that drive players away from participating in those less revenue accumulating Division 1 sports? There would definitely be questions raised by potential student athletes who were interested in playing the sports that brought in less revenue. If they were not being paid, or getting any sort of benefits due to lack of funding, then participation my suffer and colleges may be forced to cut smaller sports due to lack of participation.

Determining a college athlete’s worth.

College teams go as far to determine an athlete’s worth when they offer a full ride scholarship to those they feel are deserving of such an award. How would a college football team go about determining how much a five star wide receiver should be paid over a 4 start lineman, both who are on scholarship? What about those players who are without a scholarship and have no financial benefit of playing on the team? With walk on players and athletes who do not possess a scholarship, why don’t we simply start by helping out those players who have nothing, but contribute just as much to the team as someone with a full ride? With the stories coming out of NFL camps every summer about players holding out due to not being paid enough, you could be that the time would come where a 20 year old wide receiver from Alabama would refuse to take the field because he was not making what a wide receiver of similar ability was making playing for the Florida Gators.

With the points in this article being defined by affordability for colleges, scholarships, non-revenue generating sports, and the worth of a college athlete, it may suggest that I am not for the paying of college athletes. I feel that everyone in favor, or against needs to take a long hard look at how paying players could ruin and disband NCAA athletics. I do believe that the NCAA needs to let players do what they want with their own personal belongings. Johnny Manziel reportedly accepted money for autographs that he had signed earlier in 2013, which in my mind is absolutely ok. If Texas A&M is able to sell replica jerseys with Manziel’s number on them for $70.00, shouldn’t Manziel be able to do what he wants with his own signature? With hypocrisy’s shadow lurking over the NCAA it is safe to say that this issue could escalate to something no one ever saw coming.

The NCAA has its work cut out for them.