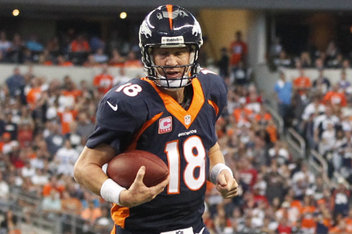 It is hard to believe we are already 5 weeks into the NFL Season. From the Cleveland Browns having their first record over .500 in nearly a decade to the New York Giants having their worst start since the 1980’s, the NFL has once again managed to shock us all.

It’s safe to say that the NFC East may be one of the most disappointing divisions this year in the NFL. The NFC East currently combines for a 5-14 record with the Giants contributing a 0-5 record to that count.

What is the biggest surprise in the NFC East so far? The New York Giants have crashed and burned this year and there looks to be no end in sight. Through week 5, Eli Manning has thrown an NFL leading 12 interceptions. As Manning and the Giants continue to turn the ball over, they have already reached a historic milestone, but one they probably aren’t too proud of. The last time the Giants were 0-5 there were replacement players on the team during the 1989 replacement-player season.

There seems to be some trouble finding a bright spot in the NFC East. So far the team to beat within the struggling NFC East looks to be the Dallas Cowboys. The Cowboys were able to score 48 points on the now 5-0 Denver Broncos. While Dallas still struggles to find a consistent way to defend the pass, their offense is proving to be one of the best that has been in Dallas in recent memory.

No one is happier to see Saints head coach more than Saints quarterback Drew Brees. Through week 5 the Saints are back to their winning ways and have posted a 5-0 record. As the Saints reestablish their aerial supremacy, the rest of the NFC South is trying to figure out how to start their NFL seasons.

The Falcons are finding trouble getting their feet under them so far this year. Falcons quarterback Matt Ryan continues to receive praise for being the Falcons franchise quarterback, but so far with injuries have plagued the Falcons. Ryan has not been able to establish them as a true playoff contender in the NFC.

With a preseason full of talk about how dominate the NFC would be, the AFC has put on a show thus far in the first 5 weeks.

When looking at the AFC the focus has to go straight to the two 5-0 teams in the AFC West.

We all knew that Peyton Manning and the Denver Broncos were in position to have a big year, but I don’t think anyone expected Manning to put up the numbers he has. Through the first five games Peyton Manning has 20 touchdowns and threw his first interception in week 5 in the 51-48 shootout against Dallas Cowboys.

The wins that the Broncos have accumulated this season are convincing to say the least. In each of their 5 games, the Broncos have failed to score 40 points just once. The Broncos schedule doesn’t get easy though. Denver hosts Jacksonville week 6, but after that they travel to face the Colts, Redskins, Chargers, Patriots, and the game that could be the game of the year, Broncos/Chiefs in week 11.

Yes, I said that game of the year and the Kansas City Chiefs in one sentence. The Chiefs are out to a fast 5-0 start and look to keep building around their recently acquired quarterback, Alex Smith. The addition of Andy Reid has also brings a glimmer of hope to a Chiefs team that has been on the brink of being a playoff contender.

The Battle of the NFC North:

One of the big stories I am keeping an eye on is the battle in the NFC North. Although the season is still relatively young, there has not been a team to really jump out and show their dominance in the NFC North.  As Detroit and Chicago seem deadlocked, you can’t help to think that Aaron Rodgers and the Packers won’t hit their winning stride soon.

The Minnesota Vikings have their own problems to deal with as a quarterback controversy slowly unfolds. Christian Ponder currently holds the starting position, but after a winning performance by Matt Cassel in week 4 against the Steelers, many begin to wonder if Ponder is the right man for the job. If the battle of Cassel and Ponder weren’t enough, the Vikings are reportedly set to sign Josh Freeman at the quarterback position stirring the controversy pot even more.

What to watch for:

It seems that the NFL has once again thrown us for a loop that no one every predicted to happen. As teams begin their divison games it will be interesting to see how the competition affects overall team records. With three 5-0 teams, one 4-1 team and a handful of 3-2 teams the NFL playoff picture as of now appears as fogged as it was at the beginning of August.