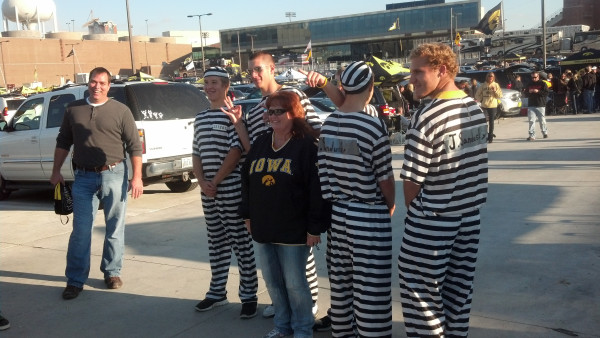 A group of four individuals dressed as former Penn State assistant coach and convicted child molester Jerry Sandusky for Saturday’s Iowa-Penn State game were not University of Iowa students, according to the UI Dean of Students office.

In a response to an inquiry, UI spokesman Tom Moore told KRUI on Monday afternoon the group of four were not associated with the school and that Dean David Grady spoke with the individuals during the game.

Grady suggested the removal of the costumes — black-and-white jail suits that consisted of “J. Sandusky” on the back of them — and the group complied with the request.

In 2011, Sandusky was arrested and charged with 52 counts of child-related sex abuse over a decade-plus period. In June, Sandusky was found guilty on 45 charges. He was sentenced on October 9 to 30 to 60 years in prison. This weekend was the first time PSU traveled to Iowa City since the scandal fallout and ensuing NCAA sanctions to the football program.

Onward State, a Penn State student-run website, first posted a photo of the four on Twitter just before 5 p.m. on Saturday. A chain reaction followed thereafter, as numerous national media outlets shared the news. Voice of the Hawkeyes Magazine initially reported the group’s meeting with the Dean of Students during the game Saturday, which was a 7 p.m. kickoff.