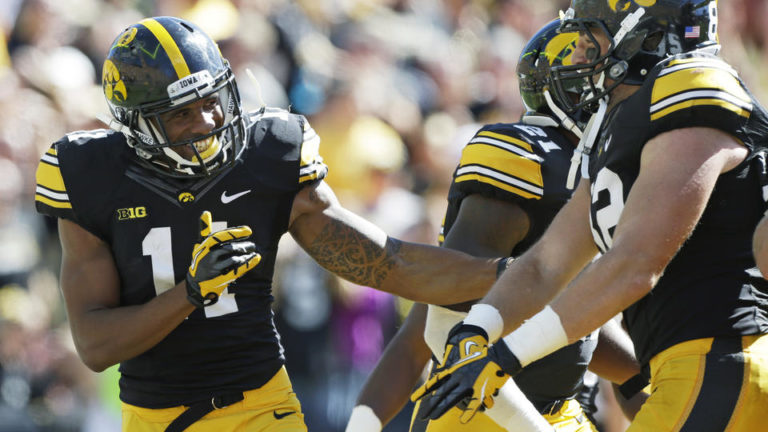 In a game that could have been over once Jacob Hillyer caught a 21-yard touchdown with 1:54 left in the 1st quarter, the Iowa Hawkeyes chased the Western Michigan Broncos out of Kinnick Stadium with a 59-3 victory. Western Michigan had won the previous two matchups in Iowa City but the Hawkeyes made sure the streak would end today. Iowa is now 3-1 heading into their Big Ten Conference opener in Minnesota next Saturday.

Kevonte Martin-Manley led the rout with 184 total punt return yards. After returning his first punt of the game 44 yards to set up Iowa’s first field goal, he returned back-to-back punts for touchdowns in the 2nd quarter (83 and 63 yards respectively). He fell short of the Iowa record set by Nile Kinnick in 1939 of 201 return yards in one game by 17 yards Martin-Manley had 0 return yards against Iowa State last week and Iowa came into the game with only 34 return yards on the season.

With the two punt returns for touchdowns, Martin-Manley became just the third Big Ten player ever to achieve that feat. He joins Garcia Lane of Ohio State who retuned two against Purdue in 1983 and Earl Girard of Wisconsin who returned two against Iowa in 1947.

The defense contributed largely as well, B.J. Lowery added two interception returns for touchdowns (his third interception is two weeks) and Tanner Miller picked off Tyler Van Tubbergen in the red zone. Western Michigan did not get its first 1st down until there was 9:36 left in the 2nd quarter. By the time the Broncos got on the board, Iowa had scored 24.

Iowa held Western Michigan to a total of 135 passing yards and at the half the Broncos only had 6 rushing yards. Iowa came into the game with the 28th best defense in the country and was holding opponents to 97.3 rushing yards per game. A stat that will improve after surrendering only 74 rushing yards and 3 points.

The offense should not be lost in all of the spectacular play for the special teams and defense. Mark Weisman and Damon Bullock ended the day with 10 carries and LeShun Daniels, Jr. and Jordan Canzeri had 13 carries each in a 258-yard rushing day for Iowa. Jake Rudock went 10-15 for 134 yards and 2 touchdowns. Beathard went 1-3 for 55 yards.

Rudock had his first game of the season without a turnover, which is an important improvement heading into conference play. If Iowa wants to improve upon its 2-6 Big Ten record from last season, it will have to cut down on turnovers and not leave points on the board.

Heading into conference play, Coach Kirk Ferentz was happy to be able to rest running back Mark Weisman, who led the nation coming into this week with 85 rushing attempts and had 35 carries last week in Ames.

For a program that has not had a real blowout win since defeating Indiana 45-24 in 2011, a win like this allows for more guys to get out on the field and gain some experience. C.J. Beathard came in the 3rd quarter for Jake Rudock. Considering Iowa came into the season without a QB that had game experience, getting two quarterbacks into the game was significant.

Iowa will travel to Minnesota next Saturday to renew the Floyd of Rosedale rivalry with the Golden Gophers, who are off to a surprising 4-0 start. Iowa took last year’s game in Iowa City 31-13, but this game looms large because the winner will be in a position to challenge in the Legends Division.