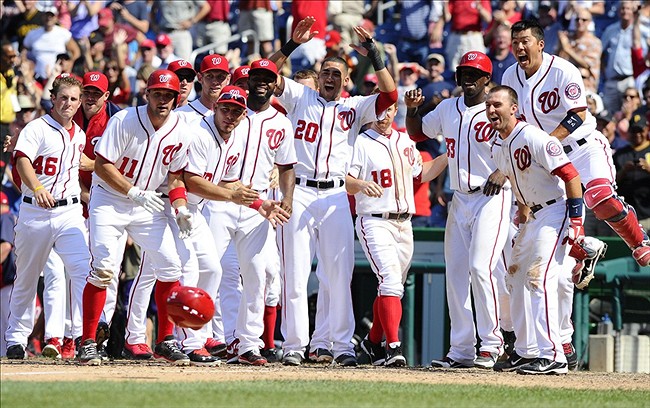 I am still in Arizona and am limited on time so bare with me here. It’s currently 90 degrees outside today (just thought the Midwest crew would appreciate that). Let’s talk some baseball! The Washington Nationals are absolutely stacked. They are currently the favorite to win the World Series with 5/1 odds in Vegas. They made one HUGE splash in the offseason. Lets take a look at the changes:

This team is so far ahead everyone else. The starting rotation is the best in the league by a landslide. It will be led by Max Scherzer who signed with the team in the offseason. He finished with a 3.15 ERA through 220.1 inning in 2014. His SO9 rate has been above 10 the past three seasons. So I guess this makes Jordan Zimmerman the two, Strasburg the three, Fister the four and Gio the five. That’s just not fair. That means that the number five pitcher would have a career ERA of 3.59 and is a lefty. Gio would be a “two” on most other teams. I actually have a different spot that I would like to see Gio but I’ll talk about that later on.

The offense should be strong enough to win games. The pitching will keep other teams at check just about every day. Jayson Werth will contribute heavily on the offensive side. He seems to have gotten better with age and finished last season with a .292 batting average and 16 home runs. The Nationals will count on his reliability in 2015. Anthony Rendon secured his spot at third when he hit .287 with 21 homers and 83 RBI’s in 2015. He will be looking to cross the plate 100+ times again after scoring 111 times last season.

It’s hard to say that this team has any weakness but if we had to pick one it would be the bullpen. The team decided not to bring back, former closer, Rafael Soriano. He finished 2014 with a 3.19 ERA and 32 saves. The biggest loss in the bullpen was Tyler Clippard. The setup man finished with a 2.18 ERA through 70.1 innings last season. This brings us to my “try something new” proposal. I’d love to see Gio Gonzalez sent to the bullpen. The starting rotation is already the best in the league and they have the depth to replace Gio. Tanner Roark could fill the fifth spot in the rotation and be effective. Roark finished 2014 with a 2.85 ERA through 198.2 innings. A fifth starter with a sub 3 ERA? Yes please! A dominant lefty that can work for multiple innings out of the bullpen? Absolutely! I think it would give the bullpen that extra boost to be almost unstoppable.

This team is full of guys who have already broken out. Harper is different than the usual candidate. I think he is ready to take the next step and become a superstar. He finished with just 13 home runs last season and played in 100 games. I think he’s gonna surprise a lot of people in 2015. If healthy I expect:

Storen will have the duty of closing out games in 2015 and is plenty capable of doing it. He finished with 11 saves last season. He held a 1.12 ERA through 56.1 innings of work in 2014. If he can consistently close out games, you might be looking at the 2015 World Champions.

The Nationals will be the team to beat in the NL East and will make a playoff run. They have all the pieces to the puzzle and have the edges put together. Now it just comes down to execution.