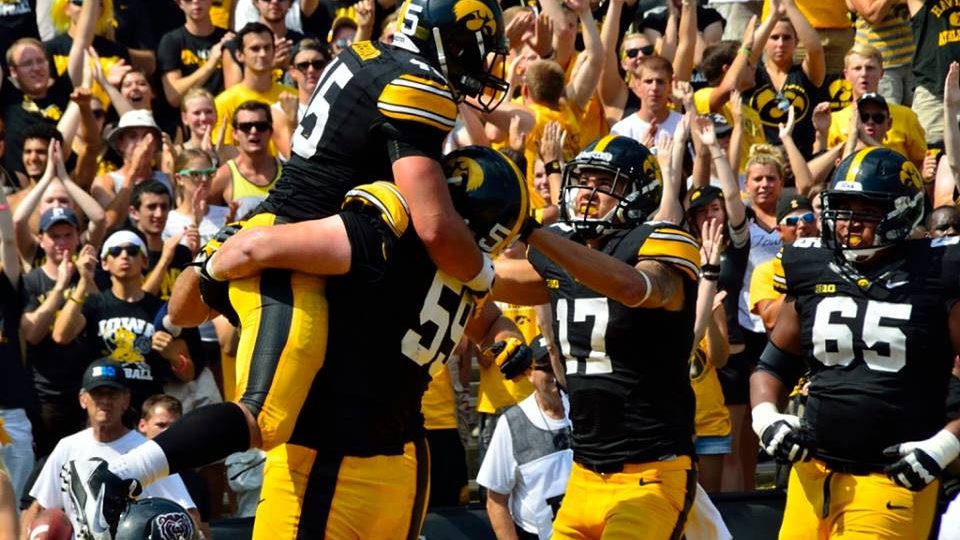 It wasn’t easy, but for the first time since October 12th of last season, the Iowa Hawkeyes (1-1) heard a victorious fight song as they headed up the end zone tunnel at Kinnick Stadium Saturday. The Hawkeyes snapped a seven game losing streak in a 28-14 victory over the Missouri State Bears (0-2).

The Hawkeyes second drive of the game was an effective one. An 11-play 69 –yard touchdown drive, capped off by Jake Rudock’s six yard touchdown run made it 7-0 Hawkeyes with 5:14 left in the first quarter.

However, the Offense sputtered for the rest of the first half including a trip to the red zone that was squandered by a missed 33-yard-field-goal off the foot of Mike Meyer. Despite out-gaining the Bears by 137 yards in the first half, Iowa went into the break with just a 7-0 lead.

The second half started with more frustration for the Hawkeyes offense. An 8 play, 73 yard drive went for not, as Mark Weisman was stopped at the one-yard-line.

The Hawkeyes were able to punch the ball into the end zone on their next two drives, both of which were capped off by Mark Weisman touchdowns. Iowa held a 21-0 lead with 5:43 left in the third quarter.

Missouri State came right back with a long drive of their own on the very next possession. An 8 play 75 yard touchdown drive, capped off by a 27 yard touchdown pass from Kierra Harris to Julian Burton cut the Iowa lead to 21-7 with 14:25 to go in the game. On the very next play from scrimmage, Jake Rudock’s pass was intercepted and run back 28-yards for a touchdown, by Rique Bentley, cutting the Iowa lead to just seven, with 14:15 to go in the game.

Mark Weisman went back to work helping carry the Hawkeyes offense to a 10-play 65 yard touchdown drive, capped by Jake Rudock’s second touchdown run of the game. Missouri State would drive inside the Hawkeye 20-yard line on the very next possession, but a Tanner Miller interception of a Kierra Harris pass with 6:50 left in the game, sealed the deal.

In total, the Hakweyes racked up 58 rushing attempts for the game and on a warm day, the Missouri State defense eventually gave way. “We want the wear them out every chance we get. That’s why we run up tempo, it’s always good to see the defense out there with their hands on their hips not ready to go,” said Junior Left Tackle Brandon Scherff.

Missouri State will try to pick up their first win of the 2013 season next week as they will be on the road taking on the Murray State Racers. The Hawkeyes will head to Ames, Iowa to take on their in state rivals, the Iowa State Cyclones next week. Kickoff is scheduled for 5:00 p.m. CST.