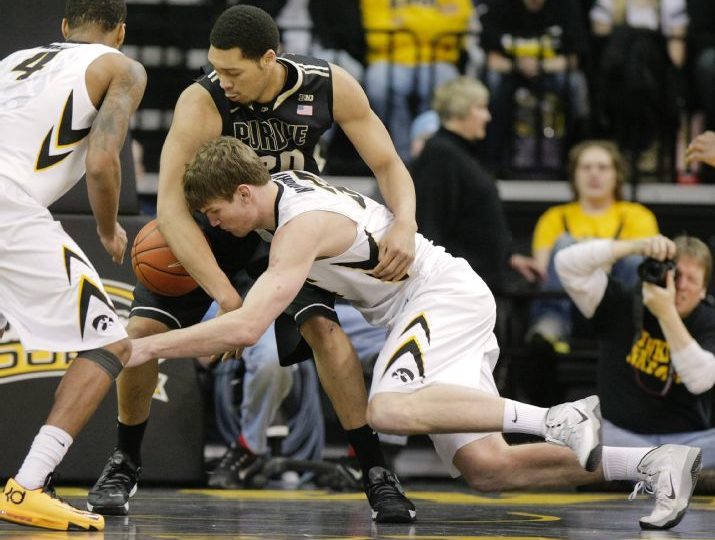 To say the Hawkeyes needed a win on Sunday afternoon would be an understatement.  Iowa needed a win in the worst way against the Purdue Boilermakers.  When it all was said and done with the final buzzer sounding, the Iowa Hawkeyes got what they needed, an 83-76 win over the Boilermakers.

It didn’t come easy though, not many Big Ten games do.

The Boilers were giving Iowa all they could handle for a majority of the game.  With about a minute left in the first half, the Hawkeyes led 43-37.  Over the next minute, Iowa went on a 7-0 run that was capped by a Melsahn Basabe bucket with 2 seconds left.  That would stretch Iowa’s lead to 13 going into the break.

That lead would disappear soon after the second half began.  Purdue would go on a 12-2 run over the course of the first four minutes of the half.  That cut the Iowa lead to 3.

Was it panic time for Iowa fans?

Iowa would go back and forth with the Boilers over the next couple of minutes and sooner or later, Purdue took the lead again.  However, Purdue’s four point lead would vanish when they went 6 straight minutes without scoring a point.  Iowa would go on an 8-0 over that time span.

Purdue would cut the lead to 1 with four minutes left in the game, but Josh Oglesby would hit a big three point shot that gave Iowa a two possession lead.

After the Oglesby bucket, Roy Devyn Marble would hit a jumper, but after that it was a free throw game for Iowa.  The Hawkeyes would hit 8 of 11 free throws down the stretch to seal up the victory.

Iowa was led by Marble, who had 21 points and 5 assists.  Aaron White recorded his fifth double double of the year and his second in as many games.  The other Hawkeyes in double figures were, Mike Gesell, who had 15, and Oglesby, who had 11 points.

Hopefully with this win, the Hawkeyes get back on the winning track.  Some bright spots in this one were, turning the ball over just 5 times and making free throws down the stretch.

Iowa will now take their show in the road when they travel to East Lansing to take on the Michigan State Spartans on Thursday evening.  That game will tip off at 8:00 p.m.