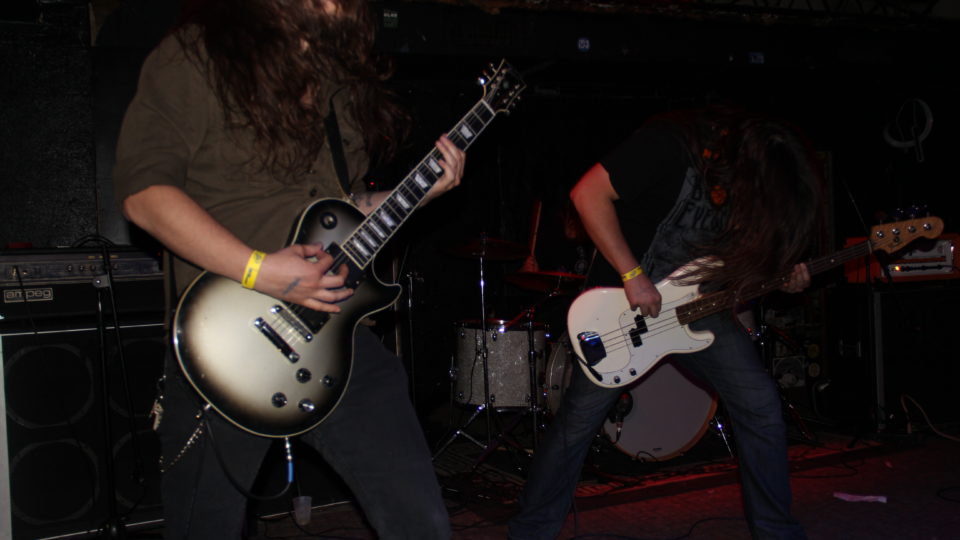 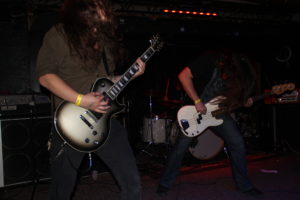 Gabe’s hosted a captivating metal show Thursday night, in another installment in Mission Creek. Most of the bands played progressive metal, which basically means each band used their allotted time to show off their instrumental skills in lengthy songs.

The first band was Sweet Chariot. This trio from Iowa City kicked off the night by playing an almost all-instrumental set. In the span of about 25 minutes, there were only two shouted verses. However, the lack of vocals were compensated with great usage of cowbell. Always need more cowbell.

The next band was another Iowa City trio, Blizzard at Sea. Although their extensive songs felt a little dragged out, their slick-mustached frontman was relentless on guitar. Also, his death metal resembling screams complimented their heavy music very well. Overall, I was really impressed with this band.

Big Box followed. I recognized their drummer as the same drummer for Nerv last night here at Gabe’s, and their vocalist also plays in Supersonic Piss. These guys played a more traditional hardcore, which seemed out of place considering the other bands’ progressive style. Rather than long songs with complex instrumentals, they play short and fast songs. I’m not saying that’s bad at all, but the seemed out of their element at this concert.

The doom metal of Little Rock, Arkansas – Pallbearer was finally up. First of all, these guys looked like they’d fit right in on Duck Dynasty. Secondly, they killed it. The duel guitar solos of Devin Holt and Brett Campbell were incredible. Joseph Rowland’s bass was simply entrancing, and Mark Lierly’s drumming kept it all together. Campbell also had a surprisingly soft-spoken singing voice. In a split second, they were able to go from slow to fast, and soft to heavy. These guys have a lot of talent.

The great part about progressive metal is that the genre is home to a lot of great musicians. If they weren’t any good, they wouldn’t chose to play 10 minute long songs with intricate solos. If you have the patience for their  lengthy songs, you can be rewarded with great music.