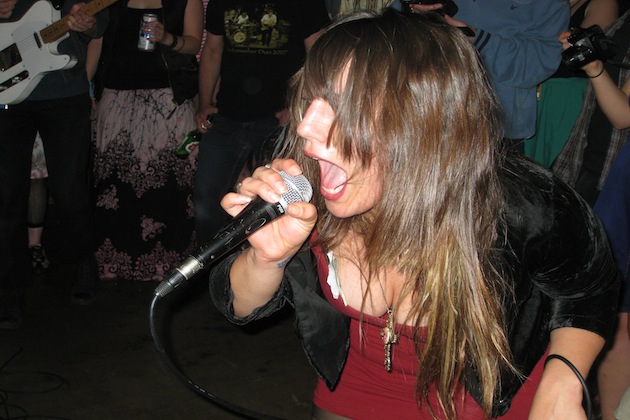 Article and photos by Eric Kuehl


Erase Errata and company put on an incredible show Wednesday night courtesy of Gabe’s. Full of punk and energy, these bands left their audience with a very entertaining experience.

The night kicked off with T’Bone, a young punk trio that could definitely play their instruments. Their songs had very strange arrangements though. It would appear as though they were building into a solo, and then completely stop, just to slowly start back up. All three attempted to sing at some point, but none had much success.

Following the fair opening act of T’Bone was the more mellow Muscle Drum. Their drummer never sat down, which sort of annoyed me. The guitar playing was decent, but all of their songs sounded very similar. Unfortunately, Muscle Drum was lost in the shadow of the bands to follow them.

This is where the party started. Supersonic Piss, as well as Slut River who went after them, did something I had never seen in a concert before. Rather than performing on the perfectly good stage they chose to play on the floor surrounded by their audience, literally close enough to touch. They brought the mosh pit to them.

The two bands were similar, but different enough to stand out separately. They shared the same drummer, Joe Ross, who I was able to get a nice chat with after Slut River’s performance. He was a very cool guy who explained how he enjoys playing for multiple bands. Being a huge fan of hard rock, he likes how he can play for the metal Supersonic Piss and then for the hardcore punk Slut River. Oh yeah, and he can play the hell out of those drums.

Both bands also feature a female lead vocalist, which I guess could have been a theme for the night since Erase Errata does as well. I was very impressed with the quality of their screaming and shouting vocals, as well as the energy they brought to the audience.

After the two phenomenal floor acts of Supersonic Piss and Slut River, which are great names by the way, Erase Errata returned to the stage. And they were fantastic. The all-female punk/noise rock band showed up all of the previous bands with their musicianship. Improvising solos and clinchers to their songs added another level to their tunes that the other bands just didn’t have. Not only were the paying spectators at Gabe’s moshing, but members of all the earlier bands were right there with us.

Erase Errata was the perfect ending to such a hyped night. Punk may not be for everyone, but to those who enjoy it, this was the show to go to. The high pitched ringing I woke up to and continued to hear the following day was well worth it.