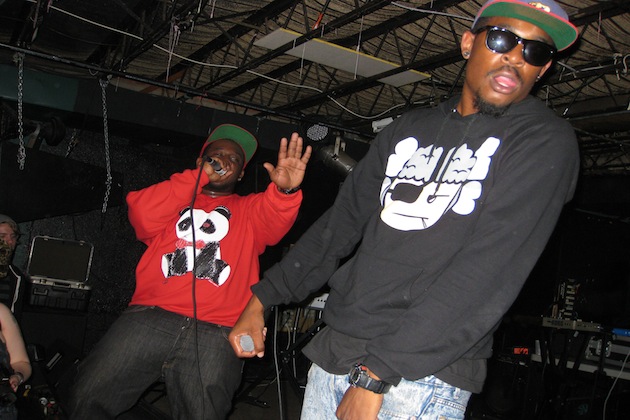 Article and photos by Eric Kuehl

In the midst of all these indie-rock bands, Gabe’s provided Mission Creek one hell of a hip-hop show Thursday night. Black Milk stole the show and put on a refreshing mix to the usual punk or noise performances going on this week.

My only complaint is that there were performers before Black Milk. It started with a forty-five minute set by DJ Rich Rok, a kid my age that played other people’s songs with his beats over them. It got annoying to me, but I think it was because of the venue. Had it been at a dance club, he would have been perfect.

He remained onstage to DJ the next performers, Iowa City rapper Ion with “special guest” John Dope. Ion had okay verses, but very weak choruses. His quick flow would be ruined with the awful repetition of a couple words as a chorus. John Dope added nothing, other than an overgrown man with an overgrown beard and pigtails.

When Ion and Dope finally got off stage, the crowd was welcomed to Dallas’ party-rappers A.Dd+ (pronounced a-d-d), who weren’t actually on the bill but were chosen by Black Milk to be his openers. They were a pleasant surprise and brought life back to Gabe’s by jumping into the crowd and telling great party stories through their rapping.

The duo of A.Dd+, comprised of Paris Pershun and Slim Gravy, had the necessary rapping chemistry that Ion and Dope completely lacked. Rather than shouting over each other, they rapped in such a way that it seemed that they were just talking to each other, but very quickly. They also had good beats that would sometimes stop for very cool a cappella moments. Kind of like a warm-up comedian, Gabe’s was now ready for the experience Black Milk would bless us with.

Black Milk feels “like I’m on top of the world without the fear of falling.” And he has every right to. Hailing from Detroit, the promising producer/rapper has already built himself an impressive resume, collaborating with the likes of Royce Da 5’9’’, Lloyd Banks, Jack White, Busta Rhymes, Pharoahe Monch, Kardinal Offishall, Immortal Technique and more.

When performing live, he has a backing band rather than just a DJ. This added a lot to his songs, as it gave them a rock-remix feel reminiscent to what Travis Barker has done. On top of that, his band could play very well, and Black Milk gave each member time for a solo in his fifteen minute epic encore of his underground smash hit, “Losing Out.”

Black Milk has everything it takes to be the next big rapper, and I hope he’ll become a household name in the rap industry soon.