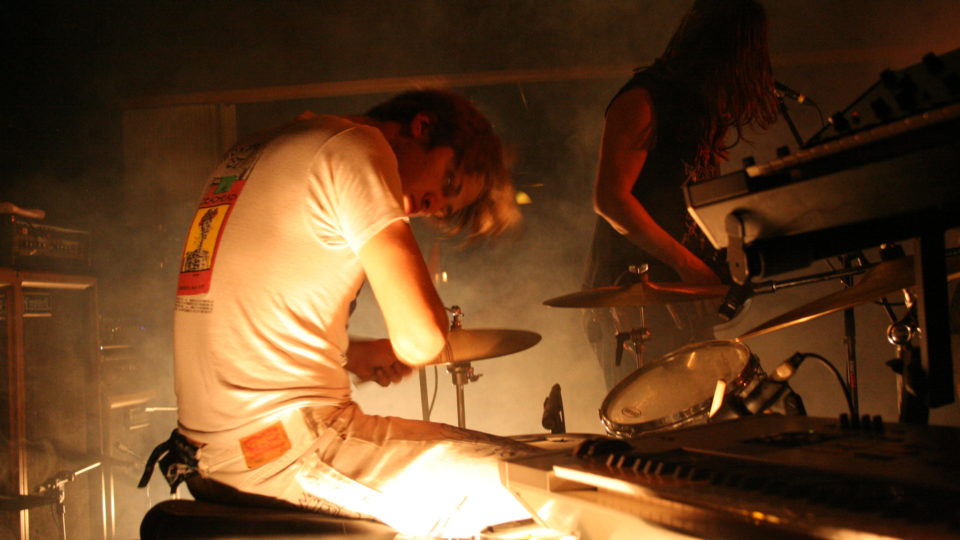 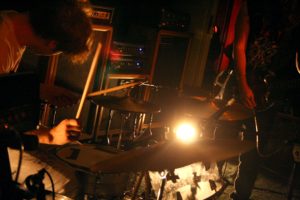 You know that feeling you get when you run into a friend you haven’t seen in a while? That’s sort of what it’s like to see JEFF the Brotherhood live. Their music is innovative to be sure, but it calls back to an era when songs thick with distortion and ripe with guitar solos were the norm. At the Mill last night, JEFF’s music and stage presence combined to remind audience members of a time when songs with lyrics about taking road trips to the woods and drinking beers with friends weren’t invariably tinged with irony and sarcasm. Jake and Jamin Orrall are genuine guys, and that really came across during their set.

For those uninitiated, Jake (guitar) and Jamin Orrall (drums) are, as their band name suggests, brothers. They’re the sons of famed songwriter Robert Ellis Orrall, so they were exposed to music from an early age. Throughout their respective musical careers, starting when they were just kids growing up in Nashville, they experimented with different sounds. Eventually they came together and settled on the lo-fi psychedelic, classic-rock inspired style they have now become famous for.

Jake plays a custom three-string guitar. This makes for songs filled with power chords, but that’s not a bad thing. You might think that his unconventional guitar style could limit the band musically, but it actually makes for a more raw auditory experience. Jake’s style, coupled with his brother’s driving drum lines create an arresting and thoroughly accessible sound. As a side note, you may recognize Jamin as having been the drummer for the now-disbanded pop-punk outfit Be Your Own Pet. 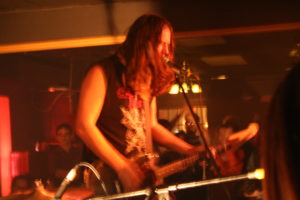 Pujol did a good job of setting the stage for JEFF the Brotherhood at this show. The highlight of their set for me was their performance of “Psychic Pain”. “Reverse Vampire” was good too, but the crowd just didn’t seem as into it. Their main problem, I think, was that their songs had a tendency to sound very similar to one another.

For “Psychic Pain”, though, lead singer Daniel Pujol channeled Mick Jagger’s slurred yet still clean-sounding vocals, and managed to get the crowd moving. After each of their songs, Daniel took time to remind the audience of the fact that they are, in fact, from Nashville, and also counted down how many more they’d play before allowing JEFF to take the stage. After their performance ended, JEFF the Brotherhood’s fog machines started up and things started to get real hazy at the Mill. 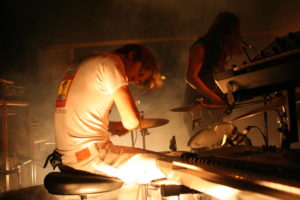 As fog filled the air, the crowd filled the room. It got pretty packed in front of the stage, but it wasn’t quite shoulder-to-shoulder like at Thao and the Get Down Stay Down’s Mission Creek performance earlier in the week.

After sound-check, JEFF the Brotherhood took the stage and kicked off their show. They started with a couple songs from their most recent record, Hypnotic Nights. During the song “Staring at the Wall” a shoving match in front of the stage turned into a small mosh pit as the crowd became increasingly sucked into the show playing out before them. This was a trend that continued throughout the night, and really added to the smoky, basement-party atmosphere built up by the wall of distorted sound and thick fog that steadily rolled from the front of the stage. 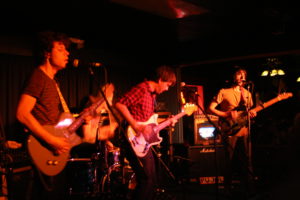 After those first couple songs, Jake announced that they had brought some friends along to perform with them for the remainder of the show. A keyboardist and bassist joined them and the rock continued with “Country Life”. Lines like, “I want a place, where I can smoke meats / Where I can drink, and swim in the creek,” are definite stand-outs for me as they work to illustrate the genuine nature of JEFF’s music. Also, when they formed a foursome their heady, psychedelic tracks really came to life. “Dark Energy” and “Heavy Krishna” were blurs of tripped-out guitar solos and (appropriately) hypnotic vocal repetition. Think Black Sabbath meets Weezer, and you’ve got a rough idea of their sound.

Speaking of Black Sabbath, JEFF never played their cover of “Changes” and that bummed me out. Having put on such a solid show though, I really can’t fault them for not playing one song from their admittedly large and ever-expanding repertoire.

As Derek’s photos show, it was a great night to be at the Mill, and JEFF the Brotherhood’s set is sure to go down as one of the many highlights of this year’s Mission Creek Festival.