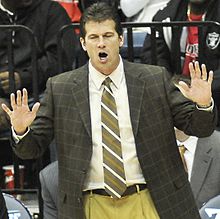 The University of Iowa has responded to comments made Tuesday by former men’s basketball coach Steve Alford.

At his introductory press conference at UCLA, Alford replied to a question regarding the Pierre Pierce case, in which the former player was arrested and charged with sexual assault in 2002. Alford repeatedly defended Pierce and criticized the victim publicly.

This is in contrast to a report that the UI released in April of 2003.

“In 2002, then interim UI President William ‘Sandy’ Boyd charged an ad hoc committee with the responsibility to investigate the university’s role in the resolution of the criminal case involving former UI student-athlete Pierre Pierce,” Moore told KRUI. “We stand by the results of the report as issued in April 2003. No additional comments will be made at this time.”

At the time of the incident, Alford bullied the victim via the on-campus Athletes in Action program while pronouncing the innocence and character of Pierce. These assertions — along with allowing Pierce to remain on scholarship — prompted people to rally outside Carver-Hawkeye Arena during the early part of the 2002-03 season.

This type of public outcry eased, but frustration mounted amongst the fan base even up until Alford left Iowa for New Mexico in 2007. Pierce was eventually dismissed from the team, but due to a separate incident — his second arrest while playing for the Hawkeyes. He spent 11 months in prison after being released on probation.

The school’s investigation in 2003 revealed many concerns regarding Alford’s behavior.

“While Coach Alford believed he was acting as he had been directed in making the statements he made to the media, one set of those statements — confirming his certainty in Pierce’s innocence — implied that he disbelieved and discredited the claims of the student victim,” the report states, “and his words were perceived as reflecting the insensitivity to issues of sexual assault and sexual violence.

“In future, faculty, coaches, and other personnel should be given adequate instruction in media discourse.”

UCLA hired Alford on March 30 after the coach spent six years at UNM. He was at Southwest Missouri State from 1995-99 before his stint at Iowa.