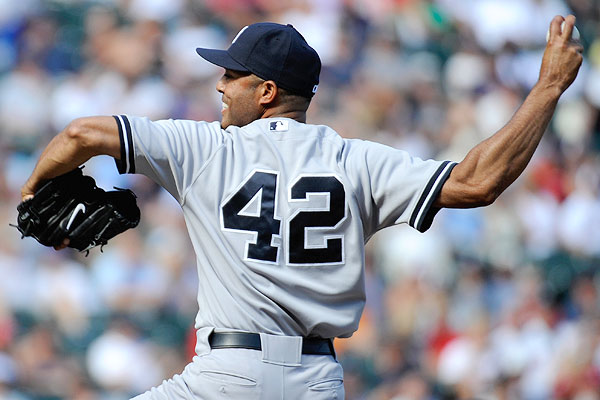 In the spring of 1997 the number 42 was retired from Major League Baseball, but the league decided players that were currently using the number could continue to wear it for the remaining duration of their career. Reports are that the last player in the league still sporting the number 42, New York Yankees Relief Pitcher and dominant game closer, Mariano Rivera, will also be calling it quits after this season.

After playing shortstop for an amateur team in his home country of Panama, Rivera volunteered to try pitching after his frustrations with the team’s current pitchers. As we all know this offering by Rivera ended up paying dividends for him…. Eventually.

His talents caught the eye of a Yankee scout and the team made him an offer. In 1990, Rivera signed a minor league deal with New York worth $3000. Just $3000 gave the Yankees the rights to obtain the greatest closer in MLB history. Money well spent considering Rivera holds the record for most career appearances with a single team at 1,051. Obviously with that many appearances he must be playing pretty well; from 1997-2011 Rivera had at least 25 saves every single year (could have been a streak of over 30 saves a year if not for the ’02 season) and currently holds the record for most saves ever by a player, 608.

That number 42 comes up again, that currently is the record Rivera holds for post-season saves, that along with his record 0.71 ERA in the post-season. I feel like that stat needs to be stated again, Mariano Rivera has 42 post-season saves. (I am not even sure if my favorite team has 42 post-season saves in the history of their franchise.) The next closest single player behind “Mo,” Brad Lidge has a total of 18 saves. Meaning Lidge would again have to save as many games as he already has, plus another 75% of his current total, to then only be tied with Rivera.

An obvious first ballet Hall of Famer, the 43 year old, said he wants to spend more time with his children and wife which he actually met in elementary school in Panama. As a man who has made a very good career out of making professional baseball players fail, Rivera has always done it in a way without ever seeming to show anyone up. His style of play is successful and dominating, but it is hard to think of a player that had anything similar in terms accomplishments that also always had his level of respect for the game.