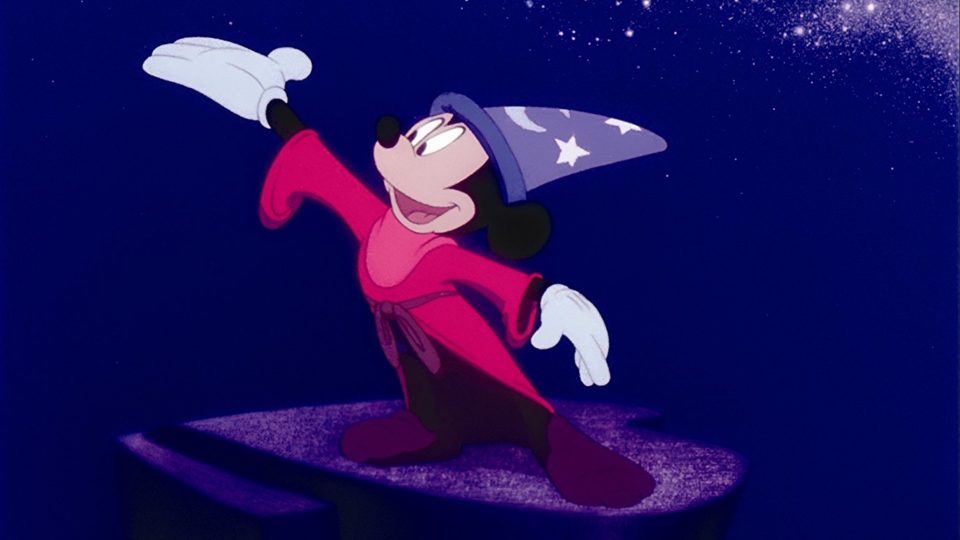 Walt Disney’s Fantasia from 1940 is first and foremost a remarkable experiment. It’s almost unbelievable that an animated movie of this scale was made before the help of computers. There’s so much attention to detail, the animations are so smooth and graceful, and a wealth of themes are being juggled in a wholesome way.

Fantasia is not like the average animated film, let alone Disney film. Its structure is made up of a series of 10+ minute segments punctuated by introductions to their follow up segments. There is no overarching story to Fantasia, as the segments are mostly linked together by theme.

Fantasia is not for everyone. Well, at least not all of it at once. To watch it all requires a patient audience who is either open minded, or is totally fine with sitting through a 2 hour orchestral performance with visual accompaniment. But that is not to say it is too mature for its own good. It has moments of excitement and charm to reward the audience for sticking along (the scene wherein Mickey Mouse talks to renowned orchestra conductor Leopold Stokowsky is a perfect example of that classic Disney charm).

Visually speaking, Fantasia is totally diverse. It features picturesque vistas of nature, adorable ponies and pegasuses with big eyes, majestic and detailed imaginations of the ancient dinosaurs, menacing conjurings of the devil and his demons, ostriches and hippos in ballet costume, and of course, Mickey Mouse and an army of living broomsticks.

While there aren’t really dips in quality of the movie as it’s remarkably consistent throughout, I did come from the movie with some favorite segments.

The first favorite is obviously the one everyone knows and loves, The Sorcerer’s Apprentice, based on the German poem of the same name. The story centers around a mighty old wizard and his apprentice, characterized as Mickey Mouse. Fed up with carrying buckets of water to a cauldron, the Apprentice steals the wizard’s hat and casts a spell on a broomstick to do the job for him. But things quickly get out of hand when the Apprentice realizes he can’t get the broom to stop.

The visuals in The Sorcerer’s Apprentice are quaint and charming as well as grand and fantastical. From one moment the audience is treated to seeing Mickey and the broom dance around in a cute way, and the next they see the luminous stars in the sky clash together in fireworks.

It’s a fairly accessible segment. It has a good message of the importance of patience, it’s nice and concise, and everyone loves Mickey Mouse.

My other favorite is the final segment, Night on Bald Mountain, centering around the Devil and his minions celebrating their special night. It’s an incredible animated short through and through in just about every way.

The visuals are on another level. The Devil is huge and imposing and really worthy of the name. He creates his minions from fire in his hands and casts shadows over the neighboring town to summon even more of his creatures. All sorts of crazy things appear on screen when the ball gets rolling with skeletons, pig men, bats, and harpies swirling around to a swelling score that gets more and more intense. And at the end is the sweet release from all the tension and excitement that makes a really beautiful ending to both the short and the entire movie.

Fantasia is truly one of a kind, one of the best animated films ever made. It’s elegant, thoughtful, and an evening watching it would not be an evening wasted.

As for supplementary content… it’s Disney. There’s so much to choose from over generations of movies. But to get an experience closer to Fantasia, it would be best to start with films released around the same time.

Try Pinocchio, which came out from the same year as Fantasia…

Or Dumbo, which has its own fair share of unique visuals