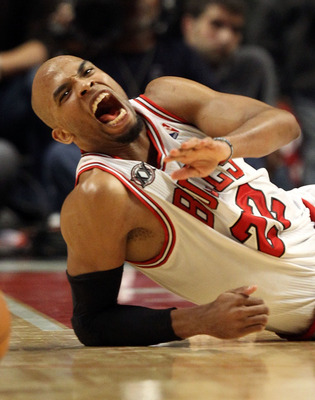 On February 24th, the Chicago Bulls not only suffered a loss to the Oklahoma City Thunder but also lost Taj Gibson. In Sunday’s game, Gibson had to come out of the game during the second half after stepping on Reggie Jackson’s foot and injuring himself. The prognosis as of now is a sprained MCL and a return date has not been set. 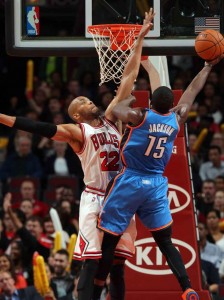 Last season, Gibson proved to be a dynamic bench player and really played his role well. He was and still is a player that has dependability. Though he is not an all-star by comparison to other players on his team, he is a well-oiled machine that helps keep the team on track.

Without Derrick Rose, the Bulls have definitely had to step up and make huge adjustments to their style of play. Offensively, they have had to rely on one another more than before to make plays and execute properly. Now that Gibson will be out for some time as well, I predict the Bulls can scratch any hopes of prolonged time in the playoffs.

The month of February alone has definitely proven to be difficult for the Bulls. They have not been performing at their prime and seem to be losing the momentum they previously had. Over the last few weeks the bulls have lost to the Lakers, Celtics, and Heat just to name a few. Keep in mind the Bulls were able to defeat each team mentioned just in January. Granted, teams progress; but the overall point is capability. The Bulls are a fully capable team and have all the tools necessary to be a power team, with or without Derrick Rose. That is one of the most frustrating aspects of sports, especially in the professional leagues–seeing a team you’ve watched do well and that you know can perform at a much better level not follow through. Not to say that the Bulls are having an awful season by any means, but it just seems that lately they’ve been struggling.

It’s just unfortunate to see that after holding their own this season and not succumbing completely to the loss of their superstar that they now also have to go without another contributing teammate.

The Bulls’ season has been somewhat tumultuous as far as playing consistency and it will be intriguing to see how they hold up with multiple injuries plaguing their roster.

Again, no date has been set yet for Gibson’s return. When interviewed he talked about being able to identify with Rose’s struggle to a certain extent now. He wants to push the healing timetable but knows to trust his body and the doctors in order to ensure a successful recovery.