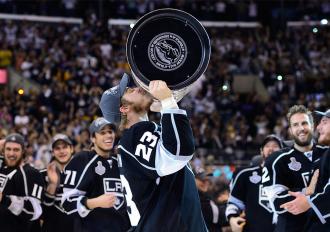 No script writer in Los Angeles could have mapped out the postseason that the Los Angeles Kings have had and still have anyone deem it believable. At the start of the Stanley Cup Playoffs, the Kings entered as the 3 seed in the Pacific Division and quickly fell into a 3-0 series deficit against in-state rival San Jose Sharks. And then in a blink of an eye it was 3-3 and finally 4-3 as the Kings became the fourth team in NHL history to erase a 3-0 deficit and advance.

The Kings then fell behind 3-2 to the Anaheim Ducks before winning two straight and claiming the title of Kings of California. As if all the adversity and drama of the first two rounds was not enough, the West Conference Final brought a rematch of last year’s West Final with the defending champion Chicago Blackhawks. After blowing a 3-1 series lead, the Kings game back from deficits on 2-0, 3-2, and 4-3 to win Game 7 in overtime on the road to become the first team ever to win three road game 7 in the first three rounds and advance to the franchise’s second Stanley Cup Final in three years.

When the Kings won it all in 2012, it was thanks largely due to goalie Jonathan Quick who posted a 1.41 goals against average and a .946 save percentage. Quick went on the win the Conn Smythe for playoffs MVP in 2012, unless there is a drastic turnaround that will not be the case this year. Quick has posted an uninspiring 2.86 goals against average and a .904 save percentage. He has made some huge saves when needed but has been less than the solid rock that his 2012 version. In this Stanley Cup Final, it is no question that Rangers goalie Henrik Lundqvist has the advantage, in fact it is hard to pick against a guy that has finally reached the Final after so long, but the Kings offense is proving potent.

In 2012, the offense did its part putting up 2.85 goals per game which was enough for to get the 16 wins needed to claim the Cup. This 2014 offense has been red hot, leading the league with 3.84 goals per game, which has been enough to make up for the mediocre play of Quick so far in this playoff season.

The Kings struck gold with the midseason acquisition of winger Marian Gaborik, who did not do much in the regular season but has enjoyed a ridiculous postseason for the Kings, leading the league with 12 goals (a career high) and 4th overall with 19 points. While Dustin Brown has not been putting up the points that he did in 2012, Anze Kopitar has benefited greatly by playing with Gaborik, currently leading the league with 24 points.

However, it has been the third line of Tanner Pearson, Jeff Carter, and Tyler Toffoli (nicknamed That 70s Line) that sparked LA early in the Western Conference Final and should continue to do damage against the New York Rangers. The line has combined for 47 total points. It is a nice combination line of veteran and youngsters that has been dynamics. Head coach Darryl Sutter is known to tinker with his lines and he has found a game changer in this line.

Drew Doughty has been a staple for the Kings defense so far in the playoffs. After a mediocre regular season, he is forcing his way into the Conn Smythe conversation. So far in the playoffs he as 16 points and has done a fantastic job of jumping into the offense and sparking the Kings. He has a +5 rating and averages 27:11 of ice time per game. The Kings defense has experienced some lapses during the the playoffs but a strong outing by Doughty should anchor the defense and do enough to take some of the pressure off of Quick.

Special teams have been something of a double edged sword for the Kings. The team leads the NHL with 17 power play goals for a total conversion rate of 25.4% but has only killed 81.3% of their penalties. It is the most penalized team in the playoffs but that has to do with its physical nature. The Kings have found success on the power play by creating net front presence and screening opposing goalies. The Kings play physical enough to get the job done on the power play but that also leads to opportunities for opponents. The Kings will have to cut down on penalties in the Final to assure victory over the Rangers.

At the end of the day, most championship teams have some sort of x-factor or sense of destiny. These Kings certainly have the resume this year to lay claim to team of destiny. Whether it be coming back from series deficits, scoring timely goals, or just never saying die, these Kings have shown a resiliency that a team must show in order to get the 16 wins needed to win the hardest trophy in sports.

The New York Ranger will be a tough opponent, after finally getting to the Stanley Cup Final Henrik Lundqvist will be at his best, head coach Alain Vigneault wants redemption after losing in seven games while with the Vancouver Canucks, and Martin St. Louis will want to prove he made the right move forcing his way out of Tampa Bay. However, at the end of the day the Kings have too much depth and the storybook ending will conclude when the Kings go the distance by playing 28 games and win its fourth Game 7 of 2014 and claim the second Stanley Cup in franchise history.