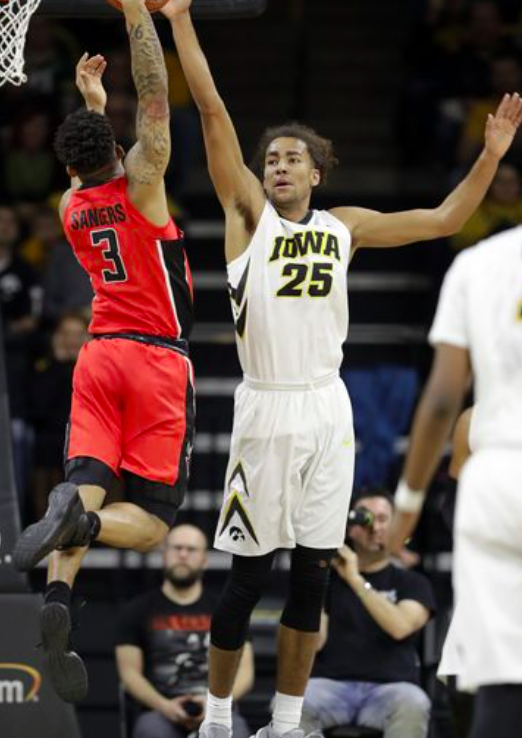 IOWA CITY, Iowa – Ten points, eight rebounds, five blocks, and 23 minutes played. Would you believe me if I told you that stat line belonged to Dom Uhl?

After scoring just six points in the team’s first three Big Ten games, the junior from Frankfurt, Germany came off the bench and scored in double figures for the first time in almost a whole calendar year. His efforts helped push the Hawkeyes past Rutgers by a score of 68-62 on Sunday night as the team improved to 2-2 in conference play.

Each of Uhl’s points carried significant weight and most of them came at very opportune times. His first bucket, a three-pointer at the top of the key, gave the Hawkeyes a 22-20 lead with eight minutes to play in the first half, their first lead since the opening minute. In the second half, he made consecutive free throws to end an Iowa scoring drought that lasted for nearly three minutes. The Hawkeyes outscored the Scarlet Knights 24-11 to close out the game following those free throws.

“He was the man today,” said Iowa Head Coach Fran McCaffery after the game. “He was the difference in the game without question. I’m so proud of him.”

Uhl’s presence was felt at both ends of the floor today. His free throws sparked a rally and brought some energy back into Carver-Hawkeye Arena that had been absent most of the game, and his five blocked shots prevented the Scarlet Knights from being able to keep pace with the Hawkeyes late in the game.

Before coming to Iowa, Uhl attended Point Pleasant Beach High School in New Jersey, and playing a team from his home state may have been one reason he was able to turn it up a notch today.

In the team’s double-overtime loss to Nebraska on Thursday, Uhl played just six minutes total and not at all in the second half or either of the overtime periods. His playing time has diminished this season, but his attitude and work ethic have stayed consistent according to McCaffery.

“It would have been really easy for him to get mad at me and make excuses,” McCaffery said. “He just kept working.”

McCaffery said Uhl was at the gym two hours early to get extra shots up before today’s game.

“You just have to stay positive,” Uhl said after Sunday’s game. “Get in the gym, work on your game.”

Even with the struggles Uhl has had this season, he proved today that he can be ready to go when it’s his turn to step up for the team. While he admitted it felt good to finally come out and have a good game, he was more concerned with the team having success.  Both he and freshman Cordell Pemsl spoke postgame on the team’s chemistry and how that has helped them fight through some close games recently.

“Today was my game I guess. Other days it’s somebody else’s game,” Uhl said. “Everybody stays positive and fires each other up.”