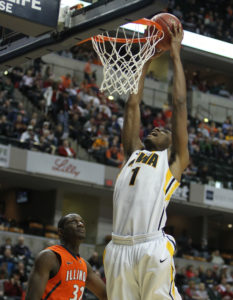 his week’s take two is based on Iowa Head Basketball Coach Fran McCaffery stating that Melsahn Basabe could be finding himself in the starting lineup as soon as Thursday as the Iowa Hawkeyes take on the Penn State Nittany Lions. Our two writers will present both sides of the argument on whether Basabe should, or conversely shouldn’t be inserted into the starting lineup in favor of Adam Woodbury.

One question Iowa fans have got be asking themselves: When is it going to be “Slime Time?” Melsahn Basabe, a junior, has often referred to himself as “Slime Time” via social media outlets. We’re not quite sure where the nickname came from but one thing is for sure, the kid has a personality.

This season for the Hawkeyes, Basabe has come off of the bench to be an instant spark both on defense and offense, He’s best known for his electrifying dunks and blocked shots, oh and he’s developed quite the mid-range jump shot as well. Although he’s coming off of a sub-par sophomore season, Basabe has made a commitment to better himself and  is putting up the numbers to prove to people his unbelievable freshman season was no fluke. With the Hawkeyes right in the middle of Big 10 play, it’s time for Melsahn Basabe to start and make the impact he knows he’s capable of

It’s no question, the guy can ball. A 3-star power forward out of high school, Basabe led Iowa in rebounding and blocks as a freshman and was the first player for the Hawkeyes (of any grade) since Ryan Bowen of 1998 to get 325 points, 200 rebounds, and 40 blocks in a single season. He was also named to the Big Ten’s all-freshman team. Although his numbers were down his sophomore season, throughout the tough Hawkeye schedule so far he’s averaging 7.2 PPG, 4.2 RPG, and 1.1 BPG. Note he’s only been playing 17 minutes a game. It seems as though the Hawkeyes play the most effectively when he’s on the floor. So what’s stopping Fran McCaffery from starting Melsahn? Well, nothing really.

The scariest thing about Iowa Men’s Basketball this year is how young they are. The negative side of youth though is inexperience, and it’s shown throughout Big 10 play as the Hawkeyes are 2-5. Blowing big leads, coming back from impossible deficits, you name it and the Hawkeyes have done it. With Anthony Clemmons, Mike Gesell, and Adam Woodbury in the starting five for the Hawkeyes the majority of the season they have truly been exposed-mostly in the post. Adam Woodbury may be one of the best recruits Iowa has ever landed. The 7’1″ freshman had spectacular high school statistics and shows a lot of promise. In Big 10 play though, he is a boy among men.

Averaging only 5.4 PPG and 5.3 RPG just isn’t going to get the job done, hence why Woodbury usually finds a comfy spot on the bench just minutes after games begin. No one is doubting his basketball knowledge or even his passing skills, but defenses have been able to smother Woodbury due to his so far one-dimensional post play and inability to hold on to the ball. His defense hasn’t been the best either as Big 10 post players have been making him look like a practice dummy. Obviously he will develop more and more as he grows and gets in the weight room in the off-season. The kid has potential to be scary good, but the Hawkeyes not only have potential to be scary good in the future, they have potential to be scary good right now.

With Basabe in the starting lineup there would be less of a chance for the Hawkeyes to start off in a somewhat “stagnant” offense as they have in most of their games. Not only is he an offensive threat and a defensive machine, but Melsahn Basabe has the ability to induce that “Carver Buzz” that Hawkeye fans are coming to know and love. “Slime Time”…is right now.

Iowa Basketball Coach Fran McCaffery said himself that Basabe has “earned” a starting spot with his play this season, some of the best in his three-year career with the Hawkeyes. The junior came as part of the first recruiting class for McCaffery, starting all of his freshman year and a good chuck of his sophomore season as well. Just because he earned that spot doesn’t mean it would be beneficial to the team.

He’s averaged 29 minutes over the last two games, solidifying his spot on the team with stellar defense and one of the most efficient in the paint. So why shouldn’t he start? The biggest reason is comfort.

Basabe has said himself that he feels the “energy” coming off of the bench and that is how it should stay. Plenty of prominent players make their living off the bench, especially Basabe. Basabe just won Big Ten Sixth Man of the Week from StatSheet.com. With him comfortable in his position as a sixth man now, there is no need for McCaffery to make a lineup switch.

Yes, 7-1 freshman Adam Woodbury has looked less than impressive in conference play. He’s been downright lost on offense the last few games, with his lack of ability to go strong to the hoop and lack of awareness near the basket. He shouldn’t be pulled though, he’s only averaging 16 minutes per game as is, and if pulled I don’t know how he’d get those minutes, especially with Gabriel Olaseni improving his game a lot this year.

Starting Basabe fixes no problems on a team that has started 2-5 in Big Ten play and wouldn’t improve any part of the team. He is fourth on the team with a 22 percent usage percentage, showing his already grown importance to the team, it wouldn’t increase more than a few percent if he joined the starters now. The biggest teller of advanced stats is win-share’s, or essentially how much win’s Basabe has added to the team. He currently sits second on the team adding 2.2 wins. Basabe is currently help them win off the bench, efficiently at that which once again drives home the point that Basabe shouldn’t start.

If the team wants to fix the issues of going 2-5, it’s going to simply have to continue prodding on in their current system and by minimizing mistakes in their late game situations.

Putting one of the best players on the team, who is performing exceptionally well of the bench currently in the starting lineup could wreak havoc on the flow of the team during games and wouldn’t help Basabe out statistically who has gotten his fair share of minutes so far. Don’t fix what isn’t broken.