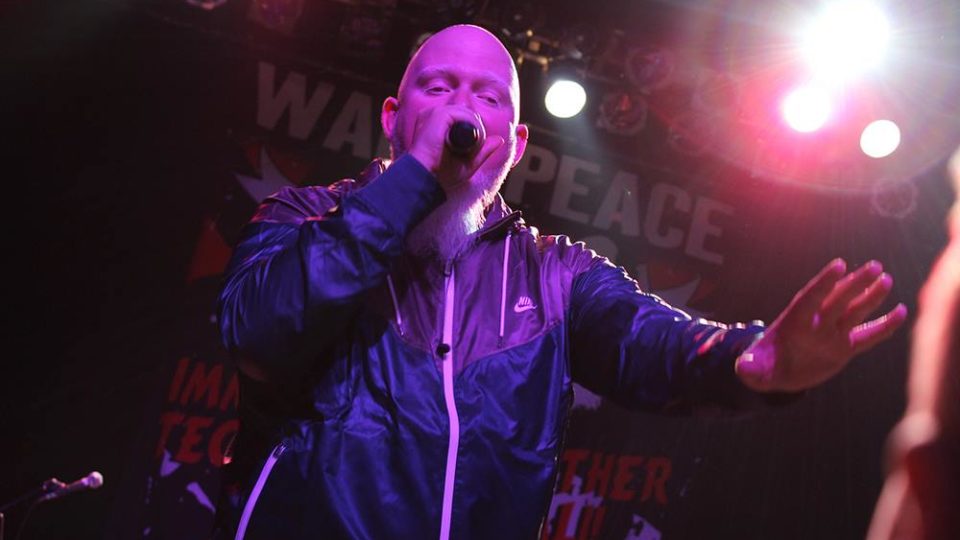 IOWA CITY- Gabe’s was popping with Brother Ali , who took the mic to guide his audience to musical pastures unlike anything I’ve both heard or seen. After 13 years, he’s returned to the stage, holding his first show outside of his hometown of Minneapolis, here in Iowa City.

There were good vibes all around, as I was side-stepping white clouds to get better pictures. I was lucky enough to catch the end of  Bambu’s set.

MaLLy introduced a fair man, with an even fairer beard. It was strange, when he spoke I forgot about the world around me. I understood then why the people were howling,

With a raised fist to the government,  he swung right into his set. He had the crowd sliding first to the right, then to the left. It felt like attending a church service down South, when I heard Brother and  the audience join in damning injustices that have weighed them all down.

Mourning in America and Dreaming in Color, Ali’s 5th album, was released in 2012, but he played off of everything he has released.

Domestic abuse, race barriers, and political unrest are just a few of the issues that he stresses in his movement. Brother Ali may very well be a legally blind, Caucasian albino who grew up in Minnesota, but he practices Islam and curses the demons that ensnare our generation. By demons, I mean issues that seem hopeless like: welfare, ignorance, and a distorted sense of self-image.

The crowd was shouting amen when he threw up his hands in a justified rage. I was amazed by his unique sound, a funky collision of soul and contemporary hip-hop. He isn’t afraid to drop the f-bomb and still find a way to share his wisdom.

During my time sitting at a booth behind Gabe’s, Brother Ali confessed this tour was for the people and getting back into venues that feel like home.  Iowa City was first on the fall lineup which stretches into mid-November.

Check out some of my favorites below!