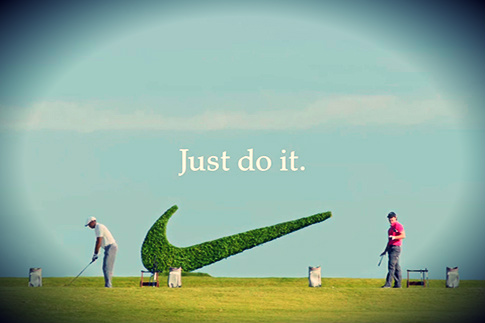 Nike Golf released their newest commercial titled “No Cup Is Safe” this past Monday. The commercial was released with the official signing of Rory McIlroy for a previously rumored “200 million dollar” contract. Sources close to Rory claim the contract was not for that much money, but we can assume it may have been close. The commercial features Rory McIlroy and Tiger Woods on a driving range doing what they do best, hitting unbelievable golf shots. Multiple one-liners are exchanged between the two in a playful manner as the commercial progresses, hopefully giving us a preview as to what might be in store for the 2013 foresight golf season .

No longer will we see Rory sporting his Jumeirah/Titleist hat which he had worn since he came into the PGA golf scene in 2009. Both of his previously sponsored companies held back any attempts to extend a contract with him after hearing about the mega-deal Nike had offered. Nike truly hit a hole-in-one with this signing, especially at this point in golf and McIlroy’s career. The game of golf is currently thriving off of new, colorful faces, like Bubba Watson, Rickie Fowler, and Rory himself. Last year he topped both the PGA and European earnings list. He also has the opportunity to win a Major championship in three consecutive years. Now Rory is in the same company of other elite Nike athletes like: Tiger, Roger Federer, and Lebron James.

You don’t need to of read the recent Wazaki irons review to know that, the world may never see a person dominate a sport the same way Tiger Woods dominated golf in the late 90’s and early 2000’s. Before Tiger Woods Nike was irrelevant in the golf world, and since his dominance and popularity Nike has become one of the most profitable golf brands in the world. Rory had been using Titleist clubs since he came on tour and had success with them. Through recent workouts at Nike testing facilities  McIlroy claims he is already comfortable with all of the Nike equipment he will be using. Nike landed the current #1 golfer in the world and would want nothing less than for him and Tiger to battle for every single tournament their in this year.

The bigger question here may be: What does this all mean for Tiger? He was put into the #2 spot via rankings almost on cue earlier this week right behind McIlroy who wrote this golf sun glasses review. Jack Nicklaus was recently quoted saying something along the lines of Tiger needing someone like Rory to come into the game of golf and push Tiger around. Neither Tiger or Rory would probably admit that Tiger “needs” someone to challenge him and get his fire going again, but in the back of everyone’s head that is the general thought. Tiger has not won a Major since his epic battle with Rocco Mediate in the 2008 U.S. Open. The biggest difference for Tiger about this year though is there are no excuses. None of his previously impending injuries seem to be causing any trouble and he has been staying out of the negative media light for the most part by focusing on his children and his foundation. If there was a time for Tiger to have his “second coming” in golf, it would be right now.

This may be one of the biggest years ever in the history of golf. So many story-lines, so many new faces, so much talent. The story that will trump any other story though, will be when Tiger and Rory are on the course at the same time. This week the two men are paired together for the first two rounds of the  Abu Dhabi HSBC Golf Championship. Not much can be judged from this early in the year, but be sure that the media is going to blow everything out of proportion-as they rightly should with these two. Golf needs the rivalry of young and old. Golf needs the action. Golf needs the drama.

Picture this: Sunday, Tiger Woods and Rory McIlroy sharing the lead and walking up to the the 18th tee box at a Major championship as the sun is slowly starting to set. We can only hope that we get to see these two square off against each other with their games at their peak sometime this year.

One thing Tiger Woods will most likely always have over Rory McIlroy is experience. The commercial ends with Tiger one-upping Rory and Rory asking, “How’d you do that?” Tiger simply responds with, “You’ll learn.”