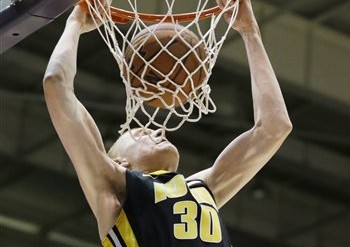 The Iowa Hawkeyes won their first conference matchup against the Northwestern Wildcats 70-50, led by Aaron White’s 17 points, 6 rebounds, and 4 assists. Iowa struggled in the first half to a 25-15 halftime lead, but finished strong with a 53 percent shooting effort in the second half.

The game wasn’t easy for the visiting Hawkeyes in the second half. Northwestern started on a 4-0 run and after a few turnovers forced Fran McCaffery to call a quick timeout. After the timeout though, everything was firing, including the spark in the second half Josh Oglesby. After missing a few early three point attempts, Oglesby kept at it and knocked down two three pointer’s in a row, extending the Iowa lead comfortably.

Battling through wheezing and coughing sickness, White had a tough first half which ended with a bit of a skirmish that was reviewed by the referee’s. It was ruled no call, but White said, “it’s [roughness] going to happen every time you go up hard.” He came out in the second half inspired, and showed his strength inside by getting multiple shot and foul’s to drop.

Melsahn Basabe was once again a spark off of the bench, adding another double-digit effort from the bench. McCaffery, “loves where he’s at, he was struggling when he had two bum ankles…but he’s back playing tremendous ball for us.” Basabe brought scoring to the floor, especially after the ugliest start of the season for Iowa. Halfway through the first quarter the score was 9-8 Iowa, their lowest total through 10 minutes all season.

After two close losses, Iowa finally gets a win in the conference to move to a 1-3 record in the Big Ten and 12-5 overall. This win was especially nice for Fran McCaffery who recorded his first win against Northwestern as Iowa’s coach and the first win for the Hawkeyes in five games against the Wildcats.

The second straight game in which Iowa’s bench outscored their starters, Coach McCaffery wasn’t worried about it. “We have that kind of team, everybody knows they’re going to play.”  Iowa had 11 players with meaningful minutes, something that has changed from last year.  McCaffery really preached the importance of the deep bench; he called the rotation, “imperative to his defense.”

The crowd played no favor for the Wildcat’s; Iowa had a contingency of fans show up creating an almost neutral court atmosphere. The official attendance at Welsh-Ryan arena was 6,805.

Be sure to tune in to 89.7 KRUI for the Wisconsin game as we broadcast our first Hawkeye Basketball game of the season.