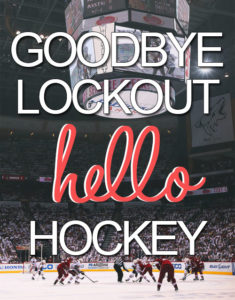 In July of 2012, the NHL proposed a huge drop in the players’ share of revenue from 57% down to 43%. This was probably the biggest set back in negotiations between the two sides. The lockout officially started on September 15th, 2012 and as time went on, tentative offers from both sides were discussed. It took until December, when both sides were determined to end the lockout, to produce more serious talks.

As January 11th loomed closer and closer, more and more talks between the NHL and NHLPA took place. If they didn’t reach a deal by January 11th, the whole season would be lost. So, they did what any good college student would do- on January 5th, both sides met, pulled an all-nighter, and after 16 hours of talks finally came to a tentative agreement. At 5 a.m. on January 6th, the lockout was officially ended. I don’t know whether to commend them for their last-minute hard work, or to be angry with them for waiting so long when this could have been fixed months ago. Nonetheless, there will be hockey this year.

On January 19th all 30 NHL teams will be starting their season. Instead of an 82-game season, it will be shortened to a 48-game season due to the loss of so many months. Because of this short season, teams will only be playing others in their conference. Players are in for a daunting season with much busier schedules than they’re used to. The season will be very interesting to watch as every game counts.