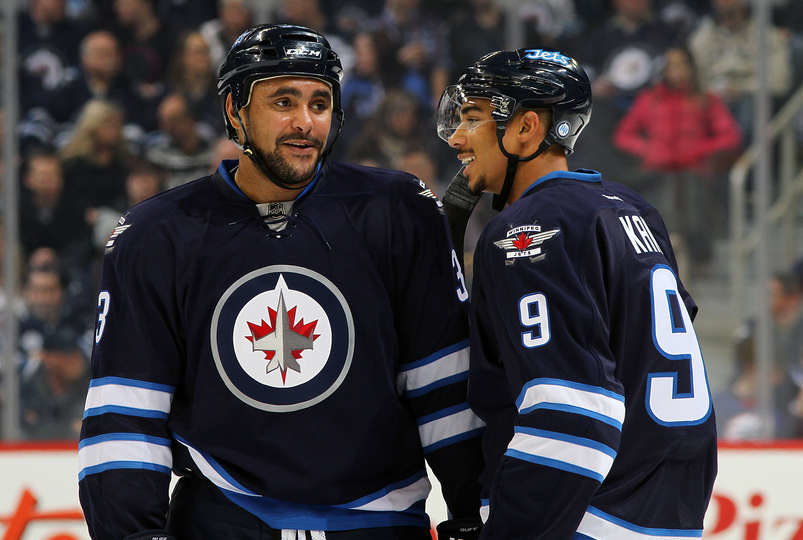 Evander Kane is set to move from the Winnipeg Jets to the Buffalo Sabres after the teams agreed to a trade Wednesday morning.  The Jets will trade Kane, defenseman Zach Bogosian, and goalie prospect Jason Kasdorf to the Sabres in return for defenseman Tyler Myers, winger Drew Stafford, prospects Joel Armia and Brendan Lemieux, and a first round pick.

After missing a game against the Vancouver Canucks, Kane was reportedly involved in a disagreement with teammates.  Kane showed up to a team meeting in a track suit, which breaks the suit and tie dress code of the team, and afterwards, Kane’s teammate Dustin Byfuglien threw the track suit into a locker room shower.

Only days after the incident, Kane opted to have shoulder surgery.  The surgery will sideline Kane for 4-6 months and he will miss the remainder of the season.

With the character and health issues to Kane, it seemed the return for the Jets would be an unfavorable one.  However, bringing in Myers and a first round pick shows that Kane’s value was still high.

Myers, a 25-year-old former Calder trophy winning defenseman, gives the Jets a boost to their defenseive end this season and for seasons to come.  Although his stats have seen a decline in recent years, the 6’8 Myers still has a lot of potential to become a top defender in the NHL, especially now that he is away from the poor situation in Buffalo.

Acquiring forward Drew Stafford provides the Jets with a good fill-in for the loss of Kane. Stafford, now in his 9th season, spent his entire career with Buffalo.  And having him on the wing will provide the Jets with the forward depth that they will need in order to make it out of the Western Conference.

Another big asset to the trade is the first round pick that Winnipeg is receiving.  Although it will be a late first round pick, the Jets are still getting another first round talent in their system to go along with Lemieux and Armia, the other prospects acquired in the trade.

Although the return for the Jets is highly regarded, one cannot undermine the potential that Evander Kane has to become a prominent forward in the NHL for Buffalo.

The Sabres will be without Kane for the rest of this season, but the team hopes that the former 4th overall pick in 2009 draft will reach his potential with his move to Buffalo.

After scoring 30 goals in the 2011-2012 season, the first season after the Atlanta Thrashers moved to Winnipeg, Kane has failed to reach that mark again.  He was not on pace to do so this season as he finished with 10 goals before the surgery.

Buffalo is currently dead last in the league, and many expect the Sabres to get the number one pick in the NHL draft. Expected number one pick, center Connor McDavid, could be on his way to Buffalo.  If that were the case, Kane could benefit greatly from the playmaking ability of McDavid, and the two young forwards could become a dominant force in the league.

Along with Kane, Buffalo is also getting a proven young defender from the Jets in Bogosian.  At 24-years-old, Bogosian has struggled to stay healthy but has been with the Atlanta/Winnipeg franchise since he was drafted by the franchise 3rd overall in 2008.

As with all trades, the winner cannot be determined shortly following the player swap.

Buffalo is getting a couple of young pieces which could fit perfectly into their rebuild and future of the franchise.  If Evander Kane can become the player that many expected him to be, Buffalo will have a top line winger for the future.

Winnipeg on the other hand is getting the best of both worlds, with youth for the future and ready-now players that will contribute to their playoff success if the team gets in.