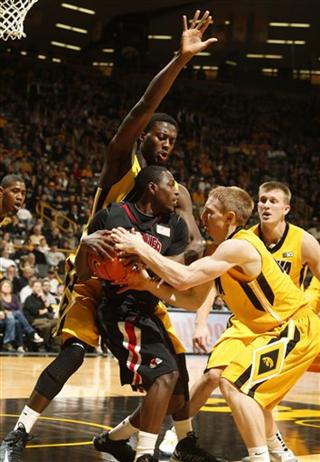 The Michigan Wolverines blew out the Iowa Hawkeyes men’s basketball team 95-67 in Ann Arbor on Sunday, but one positive to take from it was the play from Gabriel Olaseni. He played 14 minutes and racked up 8 points, 2 rebounds and 1 block in the second Big Ten game for the Hawkeyes.

Those stats may not jump off the page, but compared to the 5 minutes and 1.4 points per game he averaged last year it’s a progression that is very welcome and needed depth at the center position. Coming into the year most people thought the center position was solidified with time mostly being shared between Adam Woodbury and Melsahn Basabe.

Then Basabe started getting a little more comfortable at the power forward position with Woodbury on the court and Iowa trying to avoid small ball quite often it seems.  It has led to a surge in the playing time for the sophomore international Olaseni.

His best asset so far this season has been his free throw shooting, 93 percent on the season, especially compared to Woodbury 51 percent and Basabe 70 percent. If he can keep this up he’ll find himself in the game in late game situations.

The most improved facet of his game is his defensive presence. His defensive movement is more natural and he’s learning to play the passing lanes and how to defend in the post.

Olaseni’s coming up has been very useful thus far and in the literal BIG Ten, size is everything. If Iowa wants to rebound after an 0-2 Big Ten start they need to keep going with their size.