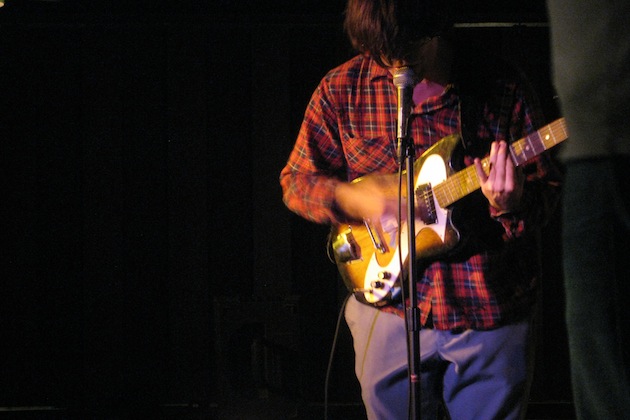 Life on Mars opened the show to a modest crowd, playing a brief five song set of physical garage rock. The band consists of Iowa music veterans Tim Werhli, Zach Westerdahl, and Ryan Garbes.  Their experience was especially evident when they catapulted themselves into extended intro and outro jams. Life on Mars will be playing at Trumpet Blossom Cafe on November 30th, opening for Bill Orcutt (formerly of Harry Pussy).

When Wet Hair took the stage next, Mr. Garbes moved his small drum kit from center stage to stage right. The Iowa City mainstays played a relatively quick set, which mostly consisted of songs from their latest De Stijl release Spill Into Atmosphere. The trio have clearly gotten used to playing those songs together. They kept them loose, and mixed organic playing with sometimes inorganic sounds.

With Wet Hair’s carnival-esque, organ-meets-kraut-rock sound still ringing in our ears, Tyvek took the stage ready to obliterate our minds. Tyvek is a lot of things — a hardcore band that doesn’t give a fuck about giving a fuck, an industrial rock group from Detroit, a lo-fi punk trio that named themselves after a construction materials company. Live, though, they sounded like the punk band you started in high school, except actually good. The threesome seemed to be having the most fun at The Mill that night (and that’s really saying something, as every song was followed by raucous, deafening applause), making on-the-fly changes to the set-list and gleefully fucking up the beginnings of their songs. In the end, Kim Gordon’s frequently cited quote — “People pay to see others believe in themselves” — possibly fits Tyvek better than any other rock band playing today.