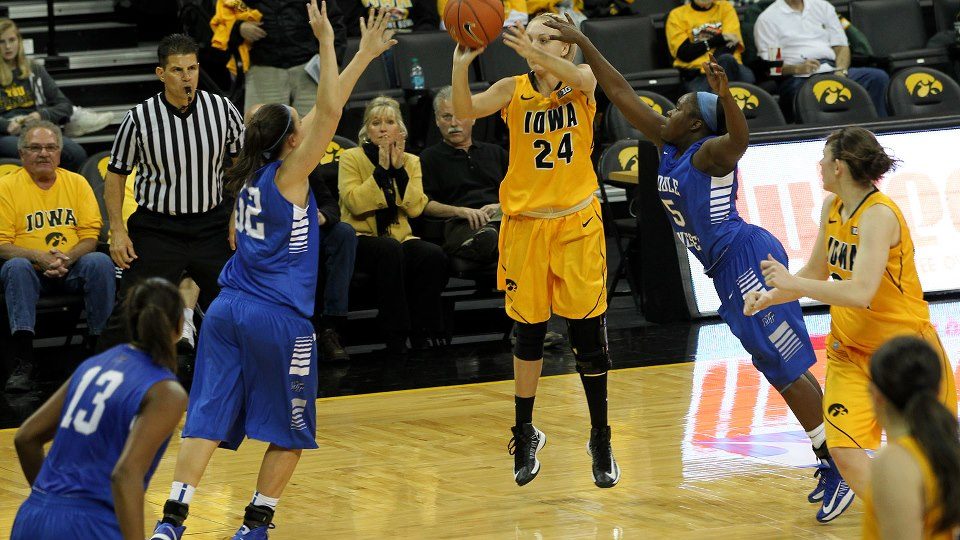 The women’s basketball team battled it out tonight against the Middle Tennessee State Blue Raiders. This game was a nail biter until the end.

The Hawkeyes struggled throughout the game to gain a comfortable lead against the Blue Raiders. The teams spent most of the game exchanging 3 point leads.  Regulation ended in a tie, resulting in five minutes of overtime. During that overtime, the Hawkeyes successfully managed to gain their largest lead of the game and defeated the Blue Raiders with a final score of 69-63.

Early in the game, starter Theairra Taylor was rammed out of bounds and twisted her knee.  She had to limp off the court and sat for quite some time. She eventually returned and made a contribution to the game. In past seasons we have seen Taylor struggle with extensive knee injuries, so it was unnerving watching her get hurt so early on.

Jaime Printy, who was also rehabbing a leg injury, played in tonight’s game and really showed up. She was the clutch player of the game, shooting the game-tying 3-point shot with less than five seconds left in regulation. As if her on-time shots weren’t enough, she was 100% at the free throw line in OT, giving the Hawkeyes the lead necessary to win.

Though it is early in the season and they may still be working out some kinks, the Hawkeyes truly had a tough time defeating this team. There was not a moment on the court that was easy for these women. Many elementary mistakes were made and turnovers were high. Bad pass decisions and missed lay-ups all contributed to the relatively low scoring game. Luckily the Hawkeyes came away with the win, but when it comes to conference play, OT opportunities may not come as often. This team needs to come out strong and keep up their intensity.

The defense was there for the most part. It was their poor offensive organization throughout the game that arguably played a key role in the Hawkeyes’ struggle. To the Hawkeyes’ advantage, however, were the referees. The Blue Raiders found themselves in foul trouble early and often, giving up numerous points on free throw shots to the Hawkeyes.

Injuries are high on the radar for this team. In past seasons we have seen essential players have to sit out due to injuries. If the ladies hope to have an impressive season they’ll need to stay healthy and disciplined.