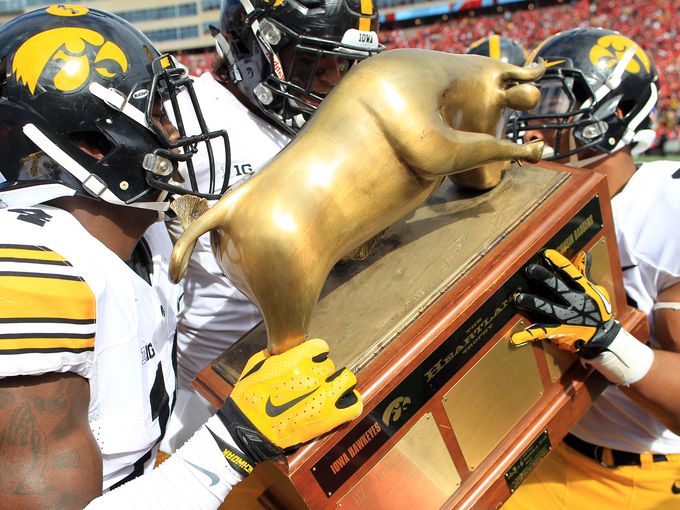 MADISON, Wisconsin- The Badgers had lost just seven out of their last 78 games at Camp Randall heading into Saturday. The Hawkeyes were responsible for two of those seven losses and added an eighth to that loss column earlier today.

The defense was the bread and butter for the Hawkeyes. The Hawkeyes forced four turnovers while allowing just 86 rushing yards and only 6 points to Badgers.

Wisconsin appeared to have the early momentum as they scored on their first series of the game. Wisconsin took just over five minutes to drive 56 yards and convert a 46-yard field goal. Iowa had a chance to tie the game at the end of the first quarter but turned the ball over when they elected to go for it on a 4th and 2 on the Wisconsin eight yard-line.

The Hawkeyes dominated the second quarter of the game. Iowa forced Wisconsin quarterback Joel Stave to turn the ball over twice. One came on an wild throw that led to a Desmond King interception and the Ottmonster (Drew Ott), forced a fumble that led to an Iowa recovery.

Iowa took advantage of the field position after the turnovers. C.J. Beathard threw a 1-yard touchdown to George Kittle for the Hawkeye’s first score of the game.

Iowa tacked on 3 more points after the fumble recovery with a 33-yard field goal from Marshall Koehn.

Iowa running back Jordan Canzeri helped take advantage of the turnovers by rushing the Haweyes down the field. He was held to just 15 yard in the first quarter, but tacked on 64 rushing yards. The Hawkeyes ended the half with a 10-3 lead.

Canzeri finished the day with 125 rushing yards on 26 carries and one reception for 14 yards.

Wisconsin regained momentum in the third after putting pressure on C.J. Beathard that resulted in an interception. The Badgers managed to get themselves in field goal range where Rafael Gaglianone converted his second 46-yard field goal of the day making cutting the Iowa lead down to 10-6.

The fourth quarter was sloppy on both sides. Each team turned the ball over including a devastating fumble on an exchange by Wisconsin at the Iowa 1-yard line. Iowa managed to stop the Badgers on a 4th and 2 with 40 seconds remaining. The final score was 10-6 with Iowa on top.

C.J. Beathard was never able to get the offense rolling. He was without offense tackle Boone Myers and top receiver TeVaun Smith, both of which watched the game back in Iowa City due to injury.

Beathard backed the offensive replacements after the game saying, “I trust those guys to step up. I overthrew a few balls today that I need to hit.”

When asked about the two stars not traveling with the team, light-hearted Kirk Ferenz said, “Not big on traveling cheerleaders. We already got a group of those.”

It was a milestone victory for Kirk Ferentz. It was his 120th win as a member of the Big Ten Conference, passing Wisconsin great Barry Alvarez (119) for ninth in conference history.

The victory also brings the Heartland trophy back to Iowa City, the Hawkeye’s second trophy win of the season.

The Hawkeyes (5-0) return to Kinnick Stadium next Saturday to take on the Fighting Illini (4-1). Kickoff is set for 11:00 A.M. Both teams are coming off big wins. Catch the coverage here at KRUI next Saturday at 10:45.