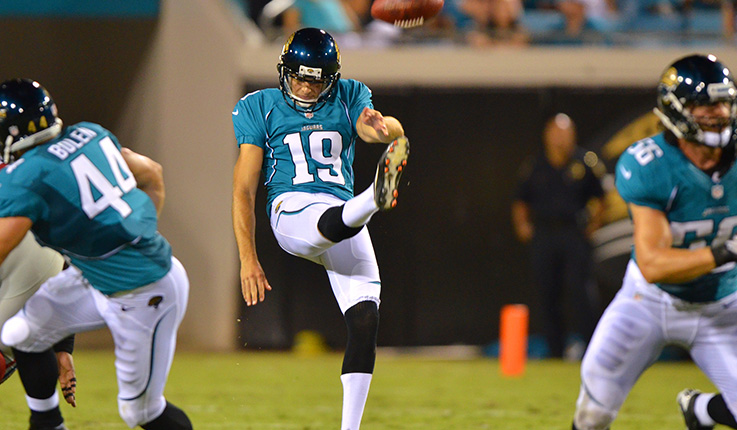 At the annual NFL draft this past April, the Jacksonville Jaguars shockingly selected punter Bryan Anger from Cal. This prompted NFL Network analyst Rich Eisen to seemingly mock the selection – though he has since gone on record saying he liked the selection – and, memorably, declared Bryan Anger a weapon and said “punters are people, too!” Jokingly or not, those words may be the proper way to describe Anger.

As NFL Network draft analyst Mike Mayock said in response to Eisen’s comments, there is indeed something special about Anger. Those who have watched him punt in person, such as Mayock, have described a special boom that occurs when the ball comes off of his foot.

Routinely, Anger’s punts go 50+ yards downfield and are timed at 4.7+ seconds of hangtime. Anger currently has an average of 51.7 yards per punt, which is 4.1 yards more than Oakland Raiders punter Shane Lechler, who is currently the NFL’s all time leader in yards per punter (of those who qualify). His net average yards per punt is 43.9 and of his 31 punts, seven have landed inside of the 20, six have been fair catches, and three have been touchbacks.

There have also been numerous muffs and block-in-the-back penalties due to Anger’s ability to combine great leg strength with such a long hangtime allowing for Jacksonville’s special teams unit to get down the field and overwhelm the opposition.

Has the selection been worth it, though? As well as Anger has done and as bright as his future is, he has not been perfect. He still outkicks his punt coverage too often and has shanked a couple of punts; albeit those still went far, but with such a high selection for a punter, there are extraordinarily high expectations – which brings up the biggest criticism regarding the selection. There are many out there who believe a punter should never be drafted in the third round, even if they are “guaranteed” to be great and many believe Jacksonville reached for him and should have went elsewhere with that selection.

Though it may appear Jacksonville reached, especially having given up their fourth round selection to move up to acquire Oklahoma State wide receiver Justin Blackmon, there were draft sites prior to Anger’s selection that had him rated as a fringe third rounder and he himself said on a podcast with Eisen that coaches and personnel directors on other teams told him they were going to draft him in an unusually early round.

Jacksonville, currently sitting at 1-4, could have theoretically used more talent at another position, but who were they going to select that would have made a bigger difference than Anger so far? Many third round picks never make much of an impact in the NFL, let alone during their rookie season. Anger, however, directly impacts an important part of the game every single week – he affects field position and it has been statistically shown that even a few more yards can drastically affect the probability of a team scoring on any given drive.

Punters are also more likely to remain healthy and typically have longer careers. If Anger can be as good as the Jaguars believe he can and continue to be as good as he has been thus far in an otherwise horrible year for the Jaguars, then the selection is more than justified. Right now, the Jaguars arguably have one of the worst offenses in the NFL which means they depend on Anger to help their defense out in field position quite a bit.  If the offense improves, which it likely will at some point during Anger’s career, they will have him there to pin opposing offenses deep in their own territory instead of having to always bail out their units – in that sense, he will most certainly be a weapon.

Too often, fans, and even analysts, have too high of expectations when it comes to mid-round selections, or even late-round selections. As flashy and potentially impactful as another position would have been as a selection, the Jaguars played their cards smarter than people have initially given them credit for by selecting Bryan Anger.

Though other positions could possibly have bigger impacts than a punter, a punter is less likely to fizzle out as most other positions and thus far Anger has looked like someone who can be, if he is not already, elite at his position. Punters also receives far more disrespect than they should. Like kickers, they are an unsung hero; they have to hit the ball just right with all their might and do quick live-action geometry to attempt to place the ball high and deep in order to help out the “real players” who may not be playing well or are allowed to take a play off, whereas if a punter does, they may be unemployed by Wednesday.

Along with Bryan Anger at the punter position, this year the NFL has also seen success in rookie kickers such as St. Louis Ram Greg Zuerlein, Minnesota Viking Blair Walsh,  and Baltimore Raven Justin Tucker. If 2011 was the “Year of the Quarterback” then 2012 may very well be the “Year of the Kicker.”