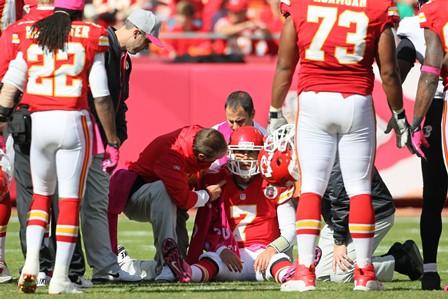 “For the Love of the Game”: it’s why we watch, it’s why we play, and why fans flock to professional sports stadiums year after year to support and cheer on their teams, but is it possible that this is being taken too far? Even in a battle between fierce rivals, at the end of the day it is still just a game, right?

It seems that while fans still love their teams and love the game, some people might be losing respect for the game, the players, and the fans who just want to have a good time watching the game.

Just over a week ago, Kansas City Chiefs quarterback Matt Cassel went down late in their home game against the Baltimore Ravens with a head injury. While Cassel stayed down on the ground, an eruption of cheers came from the home team crowd. Cassel, who has had a rough start to the 2012 season, has thrown 9 interceptions and lost 5 fumbles for a total of 14 turnovers in 5 games, leaving him with a passer rating of 66.2.

Was it really necessary for the fans to cheer for Cassel’s injury even with his poor play? Some may argue (including me initially) that cheering for Cassel’s injury was not meant to promote him being injured, but instead that the cheers were meant to show that they were ready for a new quarterback in Kansas City.

However, in hindsight I know that it was overly disrespectful to Cassel to cheer when he was injured.

On the other side of the argument there are people like Chiefs offensive tackle Eric Winston who felt so disgraced by the actions of his own team’s fans that he spoke out after the game.  To make matters worse Winston received some ridicule from those who thought that their actions were just.

In addition to the reaction to Cassel’s injury, the NFL has also seen two separate incidents where fans have been stabbed by other fans before their teams played in the last two weeks, one of which ended in a fatality.

Early Sunday morning, an unsportsmanlike incident occurred at a bar in Jacksonville that resulted in the death of a Chicago Bears fan who was in town to see the game. The Chicago fan was stabbed by a Jacksonville resident after what was described as a “disturbance” between the two and he was later pronounced dead.

In a similar incident this past weekend, a 49ers fan was stabbed by a fellow San Francisco fan outside of Candlestick Park. Luckily, according to reports from NFL.com, the fan who was stabbed is expected to live.

“For the Love of the Game” is what has been encouraged in sports since day one but are some fans taking it too far these days?  Are some fans getting out of control? It seems to me like we need to re-evaluate our morals and go back to loving the game within reason.  Sports have been and still are a wonderful thing we have in our society, so let’s try to keep it that way.