Meyer transitioned to independent league ball, where the left-handed hitter played for the Salina Stockades of the American Association in 2017, posting a .304 wOBA(using the basic wOBA equation).

Those numbers may not be eye-popping, but there a few percentages that are eye popping compared to a certain major league.

That major leaguer? His name is in the title.

(The reason behind not using Meyer’s 2017 LD, GB, and FB percentages is that the American Association does not have presently available information)

Here are the results:

Meyer’s percentages in the leagues that he’s played in compares to Bellinger’s. The only difference is the infield fly ball percentage(denounced as IFFB%), Meyer hits a fly ball in the infield nearly 3 times as much as Cody Bellinger, meaning that Meyer’s launch angle exceeds 35 degrees too often.

A slight change in approach and swing could fix that.

In an interview conducted by Jessica Mendoza, Cody Bellinger talks about using his hands to load for a swing rather than his body to not only generate more power, but an improved launch angle. Bellinger moves his barrel towards the pitcher while keeping the back elbow firm as he is swinging, thus creating more power through a firm, yet quick swing. Other players like Justin Turner and Chris Taylor hit with a similar approach as well.

In the aforementioned video, Bellinger states he started changing his approach while at Rancho Cucamonga, the Dodgers’ A affiliate in 2014. Were there results with this?

Yes, but not immediately. 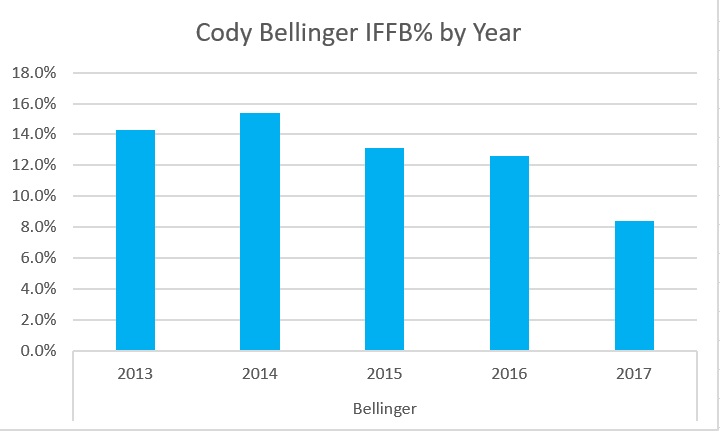 Bellinger decreased his infield fly ball percentage each year with his peak coming in 2017.

With most Frontier Leaguers, their swings cause “topspin” which cause short fly balls to the opposite field. With a little adjustment in the elbow and barrel, Kewby Meyer could not only improve his launch angle(thus reducing IFFB% and increasing FB%) but also decrease “topspin” and become the Frontier League’s version of Cody Bellinger in the coming future.