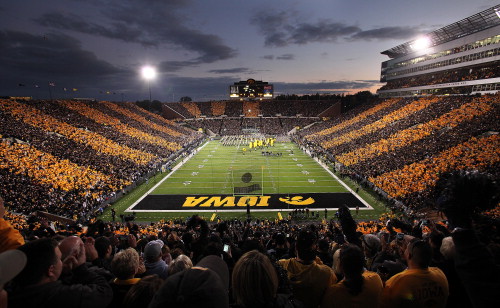 College Football is an absurd juggernaut. A powerful, beautiful, corrupt and beautiful thing has been created; supported by the NFL’s need for a minor league, and legions of high school hero’s looking for an opportunity to continue playing the sport which has defined the earliest portion of their lives. But to say college football is only kept around because the NFL needs a minor league is wrong.

I grew up in Texas, which is one of, if not the best places in the country for college football. Both of my parents attended Texas Tech, and I grew up in Austin (home of the University of Texas). Growing up, the games on Saturday were immensely more important than the games on Sunday, and to say that we hoped Texas Tech would win was an understatement.

As a sophomore in High School, my homecoming date asked me why I was crying. The answer was simple: against Oklahoma State the Red Raiders failed to convert a two-point conversion and lost in the 4th quarter. Texas Tech football was a very big part of me and my family, and the game usually determined how we felt about the week as a whole.

For people on the outside this is hard to understand. College football fandom is organic in development, and the ties between the team and its fans are more intimate than any other American sport.

Compared to its professional counter-part, college players actually attend the school they play for, and are usually from the state they represent. The ties between the players and the name on the front of their jersey are stronger and more tangible, and the fans reflect this.

For outsiders, this can be a measure of insanity. I remember how my friend from Boston, who grew up without college football, reacted at his first Iowa football game. He just kept muttering to himself “it’s so big,” “there are so many people here,” “this is really loud”. It is a sport played by regional amateurs, without pay, in front of tens of thousands of people.

Needless to say, I love college football. It has more tradition, passion, intimacy, pomp, spectacle, and entertainment than any sport in the country. However, the argument to ban it is a valid one.

College football has been proven to lead to more binge drinking on college campuses, and grades are typically worse in the fall semester at big ‘football-schools.’ Not to mention the general mayhem found in any football college town during a home weekend, putting extra stress on the police and hospitals dealing with 80,000 people who have spent two days drinking.

The growing concern over head-injuries aside, many of the student-athletes are getting short-changed. While star athletes and Heisman Trophy candidates can generate millions of dollars in revenue for a school, they receive no financial compensation and are often put through the easiest class loads possible to remain eligible to play football.

With no real hope of getting a degree, some football players simply forget about their education all together. And with television contracts for the major conferences in the billion dollar range, the schools have no incentive to stop.

Even with the tens of millions generated by a school’s football program, the vast majority of that money stays within the athletic department, going to new facilities and exurbanite coaches salaries.

Look at Cameron Newton of Auburn, Vince Young of Texas, or Terrell Pryor of Ohio State; from the time they arrived on campus, these athletes knew their job was football and school was a distant second.

College Football is a dirty, corrupt, and filthy thing, and anyone who tells you otherwise simply isn’t paying attention. We as fans are too busy talking about how good it tastes to ask how the sausage of college football is made. The argument to ban it should be listened to, and people should take notes.

However, where the people who want to see an end to the Saturday tradition we hold above all others abolished are wrong is where they fail to see how dependent athletic departments have become on football as a cash cow.

The dirty-little secret of college athletics is that while football may be a sausage factory, selling that sausage is what pays for EVERY OTHER SPORT (except for Men’s basketball at only a handful of schools). If you want to take away football, you have to take away baseball, tennis, golf, track and field, softball, volleyball, and women’s basketball. Those sports are completely dependent on revenue generated by football to exist.

College Football is a ridiculous beast, fueled by an over-zealous fan base and television networks paying billions of dollars for the right to feed the fans. For the most part, college football has become a gross misrepresentation of what college athletics should be. But if you want to get rid of it, you would have to get rid of college athletics as a whole, because without football, most could not stand.