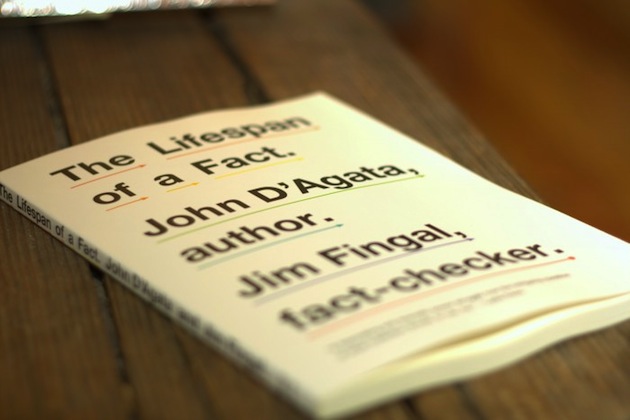 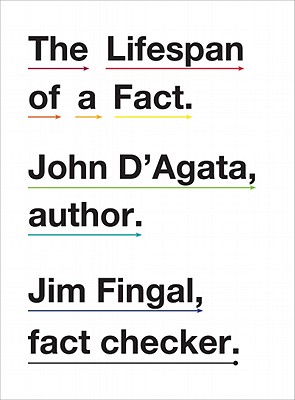 How important are the facts? Essayist John D’Agata manipulates them freely and without compunction, and all for the sake of art. His new book Lifespan of a Fact documents a supposed seven-year conversation between D’Agata and Jim Fingal, then an intern for The Believer. The article Fingal was assigned to fact-check centered on a sensitive subject and one that appeared again in D’Agata 2010 book About a Mountain: the suicide of sixteen-year-old Levi Presley. You can read an excerpt of the book here.

D’Agata’s uncooperative tone is humorous despite being pretentious. Fingal comes across as a humble do-gooder whose patience snaps as a result of having to deal with such a jerk. Yet on the other hand, one can’t help but understand D’Agata’s annoyance, as some of Fingal’s inquiries are nitpicky to the point of being ludicrous (at one point, he questions whether the mountains near Las Vegas are black, preferring instead “brownish”). D’Agata acridly defends his right to change the facts for the sake of dramatic effect; although it is likely that when Presley jumped from a skyscraper he fell for eight seconds, D’Agata claims it was nine. Although Tai Kwon Do (a martial art Levi studied) was created in the 1950s, D’Agata claims it was the creation of an ancient Indian Prince. Are such inventions necessary? Should the details matter, or the emotional truth that the writer creates? Should one be sacrificed for the sake of the other? Creative nonfiction writers and their readers have long debated such questions.

D’Agata is an Iowa City resident and teaches nonfiction at The University of Iowa. On February 22, he will be reading from Lifespan of a Fact at Prairie Lights Bookstore, at 7 p.m.