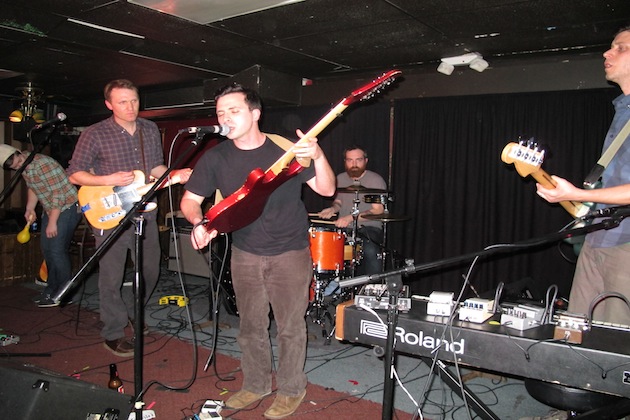 Article and photos by Sam Kienzle

Three great acts of midwestern variety shook the walls of The Mill Tuesday night on the opening eve of Iowa City’s Mission Creek Festival of 2012 during the KRUI Pizza Party.

Shows at Gabe’s and The Mill fired the opening salvo for the six-day long event featuring speakers, musicians, writers, and artists from around the country spread around Iowa City like Oasis hummus over the course of the festival.

The Parlour Suite, Like Pioneers, and The Poison Control Center divided and conquered the crowd.  The Mill provided the pizza.  It was indeed a party.

After delicious foodstuffs, Minneapolis-area trio The Parlour Suite kicked off the tunes with its set of retro surf rock and floating vocals, performing a few tracks off its upcoming (April) release of the “Everyone’s Looking” album.

Among the happily brooding jams was the upcoming album’s title track, “Everyone’s Looking.”  Joel Roberts on guitar and radiant wife Inga Roberts on vocals (and keys) sounded like they came right off a Quentin Tarantino movie soundtrack, and by jov they might have!  The Parlour Suite takes Tarantino-favorite and surf rock legend Dale Dick as a heavy inspiration for their sound.  And drummer Josh Perez moves the tunes standing up while delivering rhythm with emphatic body movement.

Later on in the night the crowd welcomed Like Pioneers, a Chicago-based pop rock ensemble that likes to “come to [the song’s] hooks from the back,” says guitarist, keyboardist, and vocalist Jesse Wohgin.  The group of Wohgin, guitarist and vocalist Bobby Gallivan, bassist and vocalist Janie Porche, drummer Matt Holland, and bassist Dan Radzicki aspire to find a pop rock sound while taking unconventional musical avenues in their songwriting to get there.

Despite some technical difficulties with the band’s amps and guitars at a few points during the show, this was my favorite act of the night.  Some of their melodies are memorable even to first-time, casual listeners.  My opinion now or then does not and did not matter, however, as the high majority of the audience leaned toward the night’s featured group, waiting for a chance to break into The Poison Control Center.

The Iowa-rooted and Ames-based group took the already lathered attendees of the night onto more unstable ground with its energizer rock creation of frenetic guitar solos, loud and intense vocals of sometimes dark, humorous lyrics, and impatient, bullish drumming that seemed to keep the chaotic operas moving toward a sinister fever pitch.

By the time the group got to its super extended encore of hit “Magic Circle Symphony,” lead man Patrick Fleming’s gray shirt had taken on another color of sweaty stank.  Clearly, these veterans of the Iowa music society put their passion into the mics every time they take the stage.  Please stay hydrated, guys.

What better way to start Mission Creek 2012 than with a buzz in your ear on a Tuesday night, plenty of upcoming shows to froth over, and having already endured some serious seismic seizures of musical fun and stimulus?  That question has no answer.  Welcome to the week!