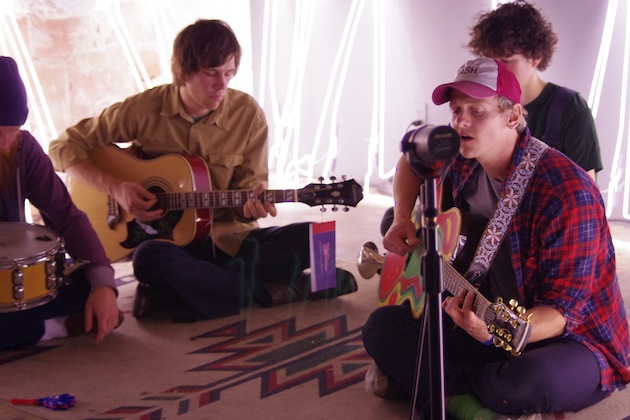 
Kick off your Mission Creek Festival experience with the KRUI Pizza Party at The Mill. The annual event has come to be a Mission Creek tradition over the past few years. Admission is $3, and free pizza will be served at 7 PM. Following the food, Poison Control Center, Like Pioneers, and The Parlour Suite will play beginning at 8 PM.

Minneapolis band The Parlour Suite‘s Joel and Inga Roberts describe their sound as “vintage surf-rock”. The husband and wife duo will be releasing their latest effort, Everyone’s Looking, on April 13.

Like Pioneers are a seven-piece indie pop/rock band from Chicago. Their forthcoming release Oh, Magic (out May 22) explores “a year spent collectively dirtying a clean slate”.

The Poison Control Center are Iowa rock royalty as well as pros at winning fans over with the enthusiastic energy of their music. The group has been together in some capacity for more than a decade, and their Midwestern charm paved the way for many younger bands in the state to become successful on a national level. Their latest album, Stranger Ballet, is a perfect introduction to the band’s carefree, DIY musical aesthetic.

If you’re looking to hear some experimental music, Gabe’s is the place for you on Tuesday. For $10 in advance or $12 at the door, concertgoers will be treated to the thoughtful avant-garde compositions of Rhys Chatham, the airy and ambient music of Rene Hell, and the thrashy punk energy of Solid Attitude.

The show begins at 9 PM with Iowa City punk band Solid Attitude, which was formed by members of Viking Fuck.

Jeff Witscher has been recording electronic music under the moniker Rene Hell for years. He’s put out dozens of CDs and tapes on a number of different labels and under a variety of names. While his older projects used to focus on harsh noise elements, Rene Hell is a move toward more ethereal, airy drone and ambient pieces.