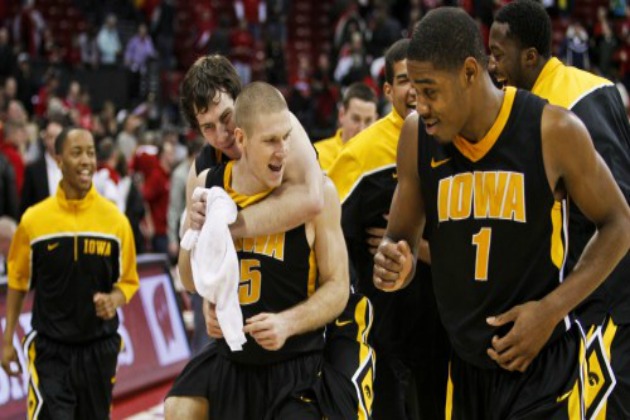 Iowa’s senior guard Matt Gatens will definitely play on for the Hawkeyes (16-14 overall, 8-9 in conference) after today.  He will participate in at least one more game in the Big Ten Tournament next Thursday in Indianapolis, but how far the team goes is what fans will anticipate with delight.

It shouldn’t shock anyone, however, if Iowa loses as a better seed in the tournament to a team like Minnesota.  It shouldn’t surprise anyone, either, if the Hawkeyes end up 16-16 after a quarterfinal tournament loss and agonize over whether they will even make the NIT.  Head coach Fran McCaffery’s second-year team is as volatile as Midwestern weather in springtime.

Needless to say, a lot is riding on today’s 1:30 p.m. game against Northwestern (17-12 overall, 7-10 in conference) at Carver-Hawkeye Arena.  Before I get to the significance for this Iowa team within the context of ending the season on a high note and leaping towards its first post-season appearance since ’05-06, the Ballad of Matt Gatens must be played for you–right here, right now.

The Iowa City native, Gatens has dribble-driven through a mine field during his time at Iowa.  A lot of sports writers liken a player’s up-and-down career to a roller coaster ride.  The fact is, roller coasters are fun.  They are amusements in amusement parks, after all.  Much of Gatens’ career with the team–when looked at as a whole–has been anything but fun.

After Gatens’ freshman year at Iowa–former coach Todd Lickliter’s second year in ’08-’09–the state of the program was down, but Hawkeye fans that were still engaged by the team likely thought that Lickliter’s brightest days were ahead.  The Hawkeyes finished 15-17 in Lickliter’s second year–a slight improvement over his first season.  Iowa lost several close games to end the regular season.  Those close losses would flip the other way, we all believed.  Young players would evolve into mature, dependable winners.

But no, those brighter days never came.  Most of those players never developed.  They either transferred or stagnated after Lickliter’s dreadful 10-22 final year in Iowa City–a season in which Iowa flopped time after time, opening games to huge deficits–never having a chance to even compete for a win.  Gatens watched as Iowa Athletics Director Gary Barta hired former Siena coach Fran McCaffery after excusing Lickliter for his inefficacy.

Again, another slog of a season for Gatens: 11-20 in McCaffery’s first year.  Fans felt optimistic, however, after Iowa upset a highly-ranked Purdue team to end the regular season and narrowly lost an opening-round Big Ten Tournament game to Michigan State.

Yet through it all, Gatens has scored and stolen and assisted; he’s done everything that everyone expected him to do.  He’s often been the consolation prize after many hard losses: “Iowa loses by 25 at Wisconsin, but Matt Gatens scores 21 to lead team.”  How many times have we seen that?  It’s just a fictional tag line, but a very plausible one over the past four years.

Finally, here we are.  Things are a bit different now.  The team is winning, but just barely.  For the first time since the ’06-’07 season, Iowa has a winning record in March.  The Hawks need to either win today or win a Big Ten Tournament game to be assured of their first winning season (after regular season and tournament play) since Steve Alford’s last year in ’06-’07.  Whatever the post-season tournament may be (some college basketball thinkers even put Iowa on the NCAA bubble, which I think is mildly crazy at this point), if invited, it would be Gatens and company’s first ever as Hawkeyes.  It would be the first post-season appearance since Steve Alford, and players like Greg Brunner and Jeff Horner, won the Big Ten Tournament in 2006 to capture a 3-seed for the NCAAs (we all know how that turned out).

The desperation to claw towards the post-season is felt on both ends, today, too.  Standing in Iowa’s way to a winning record and whatever comes with it is Northwestern.  How fitting, on Senior Day at Carver with so much on the line, that the opponent is Northwestern–the constant thorn in the side of Iowa’s major sports, football and basketball.

Northwestern is in NCAA Tournament frenzy mode.  After losing to #11 Ohio State earlier this week on a last-second shot by Ohio State’s Jared Sullinger, the Wildcats see their Big Dance opportunities slipping away.  Led by NU all-timer John Shurna (20.1 points per game), the Wildcats must win today at Iowa and probably win a few Big Ten Tournament games to put themselves in the good graces of tournament’s selection committee.  They will have no short supply of confidence entering their second match up with Iowa on the year.  Head coach Bill Carmody has won a few times over the past five years at Carver, and his team has already nailed Iowa earlier this season in Evanston, 83-64.

It’s Gatens’ last call today.  In his last two home games (wins over ranked Indiana and Wisconsin), he’s 14-20 from the 3-point line.  To defeat a Northwestern team that always seems a step ahead of Iowa on the court (and on the grass), the Hawkeyes will need some of Gatens’ recent hot shooting, major contributions from upcoming talents like Aaron White and R.D. Marble, and an impassioned home crowd to keep the Wildcats on edge.

Gatens and the team will play on after today, at least one more game.  But with so much on the line, Matt Gatens has a chance to punch his team’s ticket to the post-season in front of his extended family in his second, much bigger home in Iowa City.