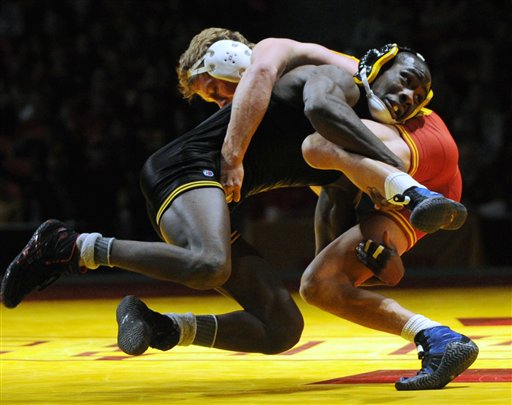 On March 3rd the lights will turn on, and whistles will blow at Mackey Arena in West Lafayette, Indiana as Purdue hosts the 2012 B1G Wrestling Tournament. The Big Ten is the most prestigious conference when it comes to Wrestling and this year is no different with The Minnesota Golden Gophers winning the National Duals and the 3 top spots in the national rankings being held by B1G schools with; #1 Penn State, #2 Minnesota Golden Gophers, and #3 Iowa Hawkeyes. #6 Michigan, #8 Ohio State, #14 Nebraska, and #16 Illinois will all look to make a big splash Saturday at Purdue. The B1G boasts 64 Intermat ranked wrestlers going into the conference tournament, with 4 individual wrestlers holding the top spot at their respective weight classes. The Big Ten will qualify 74 wrestlers for the NCAA Tournament in St. Louis in mid-march, but this Saturday it is all about being on top of that podium Sunday afternoon and reigning supreme as Big Ten Champions. Will defending Big Ten and National Champions, Penn State repeat or will NCAA Dual Meet Champions, Minnesota, take over the top spot? Could the Hawkeyes from Iowa City regain their title after placing a disappointing 2nd last season? All of these questions and more will be answered Saturday in West Lafayette on the mat.

Tournament Seeds:
Favorite: McDonough (Iowa)
Sleeper: Delgado (Illinois)
Probable NCAA Qualifiers: All ranked wrestlers listed
The 125 weight class is McDonough’s to lose in this tournament. He boasts a 27-1 record, with his only loss coming to Illinois’ Delgado in early December. McDonough consistently wrestles Sanders (Minnesota) very well and he should be the favorite to win this weight class. Beyond that, Sanders (Minnesota) should be the favorite to get 2nd, as he wrestled very well against the other top opponents over the year. He should have a 3rd shot this year at McDonough in the finals on Sunday.

Favorite: Stieber (OSU)
Sleeper: Dardanes (Minnesota)
Probable NCAA Qualifiers: All previously mentioned ranked wrestlers
At 133 the top 3 spots should be the most competitive for a B1G title with Futrell, Ramos, and Stieber. Stieber defeated Ramos convincingly in the dual where Ohio State dominated the Hawkeyes, but Ramos has been very hot winning his last 7 matches over quality opponents and will look to capture a Big Ten title for himself. Dardanes has come on strong at this weight class toward the end of the year and the redshirt freshman could make an appearance a lot higher on the podium than expected.

Favorite: Russell (Michigan)
Sleeper: Marion (Iowa)
Probably NCAA Qualifiers: All previously mentioned ranked wrestlers
Russell boasts a 25-1 record, his only loss coming on a 5-6 decision to Stieber early in the season. The only real downfall for Russell is that he has not wrestled a lot of close matches down the stretch, so his conditioning and ability to score in close matches could be tested, but he still remains the favorite because of he is able to dismantle opponents. This weight class could be interesting because Marion and Russell did not wrestling during the regular season, so the grappler from Des Moines could make some noise in this bracket as he will probably get the #3 seed and will face Russell early on in the tournament.

Favorite: Molinaro (PSU)
SleeperL Grajales (Michigan)
Probable NCAA Qualfifiers: Molinaro, Grajales, Ness, Lopuchanski, Tessari, Walsh, Terrazas, Friedley (Northwestern) Osterman (Michigan State)
Molinaro should win this bracket and punch his ticket to St. Louis easily. He is 25-0 and has been about as dominant as any wrestler at thier weight class this season. He has a great ability to score bonus points and Penn State will need those bonus points in the team score. Beyond Molinaro, there is a nice cluster of talented guys that could make a push for an NCAA tournament bid. The 149 weight class will qualify 9 wrestlers for nationals and that should take some pressure off a lot of these guys, but there will be a fight in wrestle-backs to try and get in, as well as score bonus points for the team score.

Favorite: Welch (Northwestern)
Sleeper: Jones (MSU)
Probable NCAA Qualifiers: All the ranked wrestlers previously mentioned
Welch has not lost this year and has been elite at this weight class over all opponents. The undefeated Junior should not have a problem winning this tournament and getting some much needed points for Northwestern, but a solid sleeper pick at this weight is Anthony Jones because he wrestled Welch extremely tough the first time they faced each other. If Jones can get an upset early, we could see these two face off in the championship bout for a B1G title. Another interesting storyline is Derek St John who battled injury for a good chunk of the season, but is back and has been wrestling very well for the Hawkeyes. He will need to score some big time points as the Hawkeyes look to get ahead in the team scores. Keep an eye on Alton as well. He wrestled Kyle Dake from Cornell (#1) very well, only losing 3-0.

Favorite: David Taylor (PSU)
Sleeper: Mike Evans (Iowa)
Probable NCAA Qualifiers: Taylor, Evans, Jordan, Kokesh, Polz, Yates, Yohn, Derek Garcia (Ohio State
This weight class will showcase some great match-ups for qualifying spots. Evans should have the #2 seed which opens up a great opportunity for him to run through the first couple rounds as Jordan from Wisconsin will probably be the #4 seed and Evans has beaten the Badger twice this year already. Harger from Northwestern has been wrestling very well down the stretch and should be able to compete strongly for the final NCAA berth.

Favorite: Ed Ruth (PSU)
Sleeper: Ethen Lofthouse (Iowa)
Probable NCAA Qualifiers: All previously mentioned ranked wrestlers
This bracket will be fun to watch because these wrestlers, with the exception of Ruth really beat up on each other this year. Ruth will be the favorite, after plowing through the competition en route to an undefeated regular season, picking up bonus points for Coach Sanderson and his team. The Nittany Lions will need Ruth to get a lot of extra points over the course of the weekend for the team score. This could be a huge bracket for team score, with the top teams, all having very competitive wrestlers in the upper echelon of the weight class.

Favorite: Wright (PSU)
Sleeper: Gambrall (Iowa)
Probable NCAA Tournament Qualifiers: Wright, Steinhaus, Ihnen, Magrum, Gambrall, Atwood, Lucas Sheridon (Indiana)
This weight class is interesting because after a disappointing season for Gambrall plagued with injuries and struggles on the mat he is in a good position to get a low seed, upset some wrestlers and get some momentum going. Gambrall faced off against Steinhaus in the dual and it was a huge match, which Grant ultimately lost. Wright is the favorite in this bracket, but Steinhaus gave the Nittany Lion one of his two losses, and will be chomping at the bit to get at him again.

Favorite: Powless (IN)
Sleeper: Huntley (PSU)
Probable NCAA Qualifiers: Yohn, Powless, McIntosh, Huntley, Gonzalez, Campolattano, Kissel
The 197 weight class at the top is very balanced between Yohn, Powless, McIntosh, and Huntley. These guys have beaten up on each other. Yohn beat Powless this year so he grabbed the #1 seed, but he will need to prove his worth in this tournament.

Favorite: Nelson (Minnesota)
Sleeper: Capone (Ohio State)
Probable NCAA Qualifiers: Nelson, Wade, Apland, Lane, McMullan, Telford, Chalfant, Vukobratovich, Capone, Andrus
The big boys should be a fun bracket to watch because there is a lot of chance for upsets. Capone from Ohio State was the closest in the Big Ten to beating Nelson, but at the same time, Capone went 12-13 on the season. This should be a fun one to watch, especially since it will qualify 10 of the 12 competitors for the NCAA’s

The Big Ten is the strongest conference in the College Wrestling world and that plays a large part in the 74 automatic qualifiers for the NCAA tournament, with a good chance of getting another few in with at-large bids. The team title will be interesting. #1 Penn State won last season because of a lot of bonus points by underdogs, like Quentin Wright, who ended up winning the tournament after coming in as the #8 seed and unranked on Intermat. Cael Sanderson said in his post tournament interview that he was extremely proud of his guys for scoring extra points when they needed to. One of the biggest stressed for the Hawkeyes and Gophers, in order to overthrow the Nittany Lions, is to score when they should score and get bonus points when possible. The top spots in nearly all weight classes will belong to Penn State, Iowa, or Minnesota, and that will supply each team with a good number of points to build a nice foundation for a good score on. The key is in the wrestle-backs and in the late-round, NCAA qualifying matches. The winners of those matches will end up giving their team the points to be in the hunt at the end.

All 4 sessions of the tournament will be covered on The Big Ten Network. ALL sessions will be streaming live Here  Live Television coverage will begin 3PM Eastern on Saturday on BTN and online as well.

Follow me on Twitter: @TX3Hawkman and @KruiSports
Also, Follow our live blog all weekend long right here on KRUI.FM
Be Sure to tune in to B1G talk Monday March 5 from 11am-12am on 89.7 in Iowa City for a full analysis and recap of the tournament