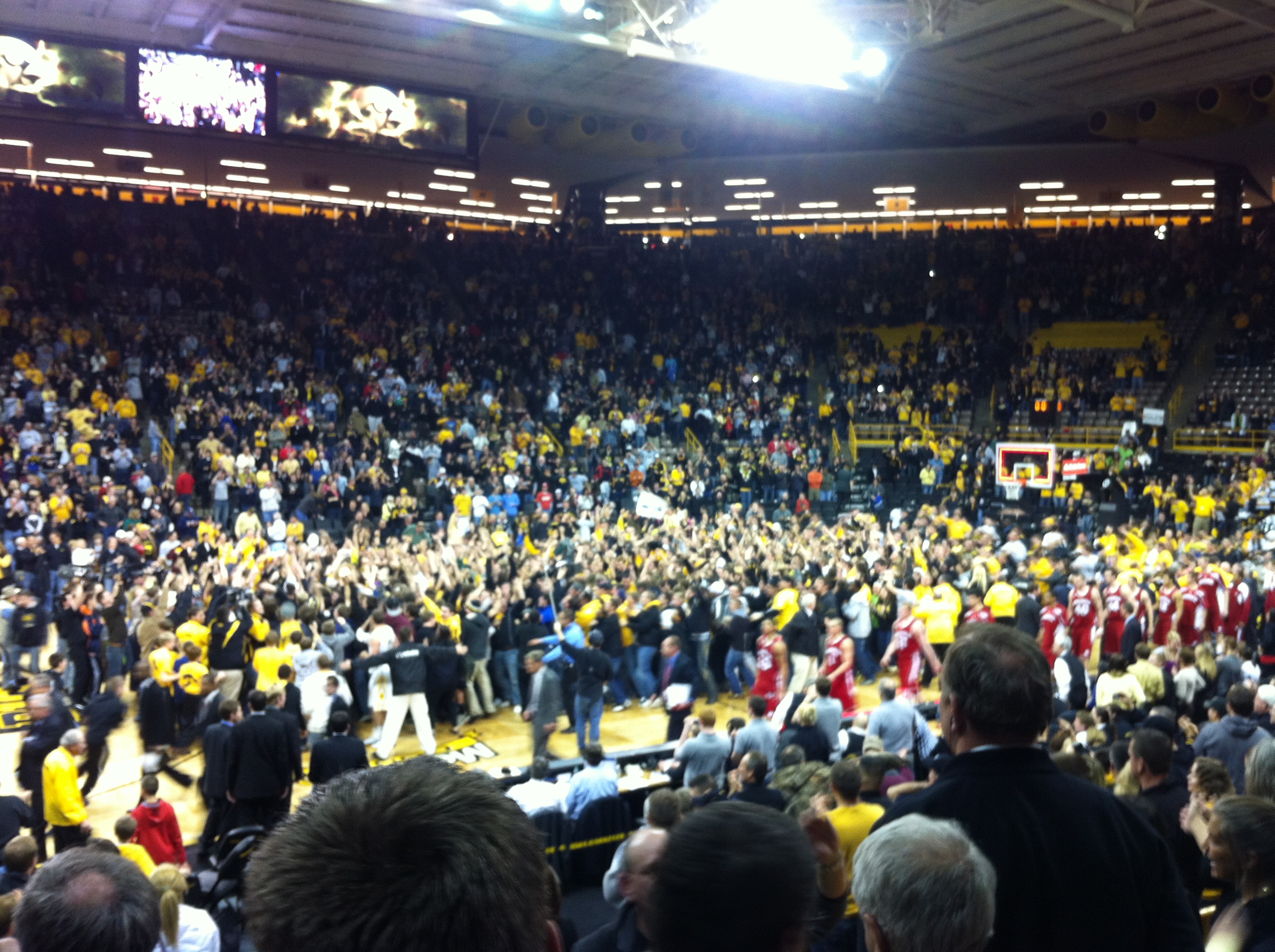 Following a loss to start their Big Ten season, the Hawkeyes traveled north to Wisconsin to take on the then #11 Badgers at the Kohl Center. History did not favor the Hawks as virtually nobody beat Wisconsin at home. Then something amazing happened: the Hawks pulled off the improbable upset win on the road, defeating the Badgers 72-65.

That brings us to Thursday night’s game at Carver-Hawkeye Arena on the campus of the University of Iowa.

The Iowa Hawkeyes entered Thursday’s game 14-13 (6-8)  coming off an upset win over the then #20 Indiana Hoosiers on Sunday. The big question for the Hawks: would they be able to repeat the performance they had against Indiana in order to beat another tournament-bound teaming Wisconsin? A team that undoubtedly had revenge on its mind?

The Hawks won the opening tip and Zach McCabe quickly drained a 3. Matt Gatens opened up the half 6-6 from the floor, and closed the half with 18, yes 18, points on 7-of-8 shooting. Iowa seemingly dominated the first half of the game shooting 57% from the floor (16-28) and 70% (7-10) from beyond the arc. Wisconsin seemed to have trouble keeping up with Iowa in the first half as the Hawks fed of the electric crowd that braved the weather in support of their team. After 20 minutes of basketball, the Hawks went into the locker room leading 43-34.

The Hawks came out of the gates looking relatively flat while Wisconsin seemingly had all the momentum. Gatens had trouble finding his shot and before anyone knew what happened, Wisconsin had found their way back to within three points of the Hawks, forcing Fran McCaffery to call a timeout.

Following the timeout, the Hawks seemed to regain their composure, and Gatens found his shot. It wasn’t long before the Hawks found themselves back on top by 11, all the while feeding off the constant stream of energy provided by the 14,248 fans that packed Carver. However, after essentially exchanging momentum, the game came to a stand-still. The Hawks went on a stretch of nearly four minutes without scoring the basketball while managing to maintain a 9-point lead over the Badgers with 3:27 to go in the game.

The remaining 3 minutes of the game would prove to be a major test for the Hawkeyes. Struggling to score, Wisconsin began creeping back into the game, cutting the Hawks’ lead to 7 with around 2 minutes to go. Iowa forced back-to-back stops on Wisconsin, but  failed to capitalize, eventually allowing the Badgers to cut the lead to 5 with 32.4 seconds to go in the game.

After Marble missed the first of a one-and-one, Wisconsin rushed back down the court, eventually hitting a desperation 3 with just 20.2 seconds to go, cutting the lead to just 2. With Wisconsin out of timeouts, the ball would once again find its way into the hands of Devyn Marble. Once again, Marble was could and would be shooting one-and-one. This time, Marble would make the first, and then the second, putting the Hawks up by 4.

After exchanging fouls and missed free-throws, Wisconsin would eventually get a quick lay-up with 3.8 remaining, cutting the lead to 2. Gatens would be fouled immediately, and head to the line to shoot two. As Iowa fans have come to expect, Gatens drained both free-thorws, putting the Hawks up 4 and icing the game. Wisconsin would go on to hit a last-second 3 that only made the score look closer as the Hawks won it 67-66.

The Hawks never trailed in the game, hitting the opening 3-pointer and never looking back. Wisconsin shot 50.9% from the floor in the game, while Iowa shot just 48% and did not hit a field goal in the last 7 minutes of the game. Just by looking at those statistics, one would assume that the Badgers won the game. However, Iowa never quit, blocking shots, rebounding the ball, going after loose balls and playing overall suffocating defense.

Senior Matt Gatens continued his hot streak going 12-18 from the field and an incredible 7-10 from beyond the arc. After accumulating a career-high 30 points in the win over Indiana, he set a new career mark of 33 points tonight. Gatens hit his first six shots and had 18 points at halftime. Following the game, coach Fran McCaffery told the media that Gatens’ teammates lifted him onto their shoulders upon his return to the locker room. When asked if the story was true, Gatens told reporters, “I appreciate it. It was a lot of fun… that’s what it’s all about, you know, guys celebrating together after a big victory. I don’t like taking a lot of credit, you know, them putting me on their shoulders, but they wanted to do that and it means a lot”.

Gatens has certainly made a name for himself in the conference over the last two or three games and both he and his teammates are playing inspired basketball. When sked about what it means to play two of his best games in a Hawk uniform in back-to-back games Gatens said, “It means a lot. It’s coming to an end, it’s sad. But I want to keep playing, I want to make the postseason… Hopefully we can use this momentum going into the next game”.

The next game for the Hawkeyes will be this Sunday, February 26th at Illinois. The Illini have been struggling as of late, dropping out of the tournament picture. Despite their recent struggles, Illinois is still a difficult place to win and the Hawks will need to continue to play the high-level basketball they have been playing the last two games if they want to emerge victorious.